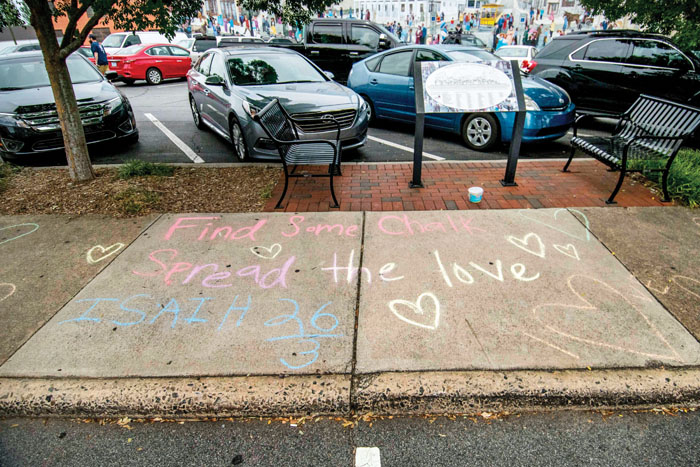 The sidewalks and street in front of Go Burrito on West Fisher Street in Salisbury were covered with chalk hearts, a bible verse, pleas for love. Last Saturday morning, two people were killed, and several injured just outside the restaurant. 7, in Salisbury, N.C. Jon C. Lakey/Salisbury Post

SALISBURY — It’s a different kind of roadside memorial, but just as powerful.

For much of the length of the 100 block of West Fisher Street — on the sidewalks and the pavement itself — people have left colorful chalk messages in the aftermath of the shootings early Sunday that left Da’Quan Robertson and Anthony Eugene Gill dead.

The sidewalks and street in this area — basically from the side of First United Methodist Church well past Go Burrito! and The Lettered Lily — are filled with drawn hearts.

Those who have contributed to the street art overall have “taken to heart” one of the messages left behind:

“Find some chalk, spread the love.”

The messages started appearing Monday and were highly visible as Salisburians went about their workday Tuesday. Many of the written messages left words such as “love” and “peace” and expressions such as “We all need love.”

Other messages were directed toward the two men killed, using their nicknames.

General messages included expressions such as “We love everyone,” “You are deserving of love” and “Too many fallen brothers.” Some faith-filled messages were left along with a reference to Isaiah 26:3, which says, “Thou will keep him in perfect peace, whose mind is stayed on thee: because he trusteth in thee.”

About 2:30 p.m. Tuesday, a small, bright rainbow — what some people might call a “sun dog” — appeared in the sky over the alley between Go Burrito! and the church. Near this spot was a chalk-drawn message saying, “God is love.”