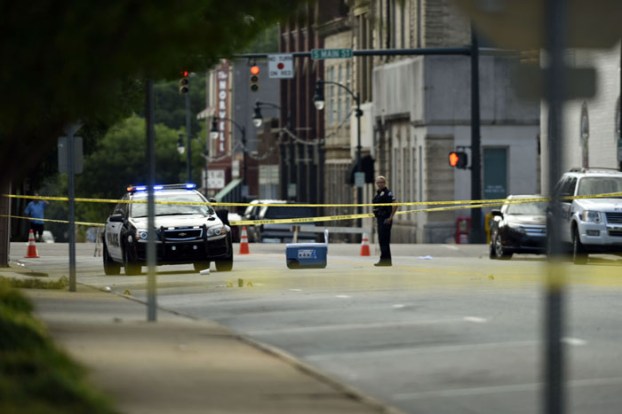 Two men are dead following a shooting in the 100 block of West Fisher Street. The shooting occured at 2:15 AM Saturday morning. Police Crime scene tape cordoned most of the block with evidence markers scattered about the parking lot behind the Wells Fargo Bank. Saturday, July 29, 2017, in Salisbury, N.C. JON C. LAKEY / SALISBURY POST

When her brother Reggie Burke was found shot to death in July 2016, Crischelle Patterson challenged the community to break the silence that surrounds so many Salisbury homicides.

“Speak up,” Patterson said as the TV cameras rolled. “It’s time for everybody to start speaking up. Stop having closed mouths, not saying anything until it’s your family.”

One year later, Patterson’s family has made tragic headlines again. Her 23-year-old son, Da’Quan Robertson, died after he was shot on a downtown Salisbury street. The 2 a.m. hail of bullets also killed Anthony Eugene Gill and wounded two other people. No arrests have been made.

Some of these young men were playing football and basketball for their high schools just a few years ago. They leave behind devastated family and friends and a community fearful of what will happen next.

If community programs could stop the violence instantly, we’d be there. The Nightcrawlers mission group walked through part of the West End on Friday night. Residents have founded a slew of programs to steer city youth toward constructive activities and positive role models — Man Up Monday, Tsunami Development, Gemstones Academy and COMPASS, to name a few. There are basketball camps, summer academies and after-school programs. Power Cross plans to open an after-school program for males involving studies, athletics and character-building. Council member Kenny Hardin advocated starting a Boys and Girls Club.

These programs come too late for today’s young adults. And no youth program can help police figure out who the killers are.

Other groups have long provided services for youth — the YMCA, Youth Services Bureau. Boy Scouts and Girl Scouts, Communities in Schools and more. The Salisbury 49ers youth football league is starting its eighth season. But these programs couldn’t reach everyone.

It’s time for the people close to these crimes to bear witness and stop this downward spiral of violence. Contact Crimestoppers and make an anonymous tip:

The William C. Friday Fellowship: Ahead of its time

By Abdul Rasheed Special to the Salisbury Post North Carolinians treasure their reputation as leaders in “The New South.” And... read more