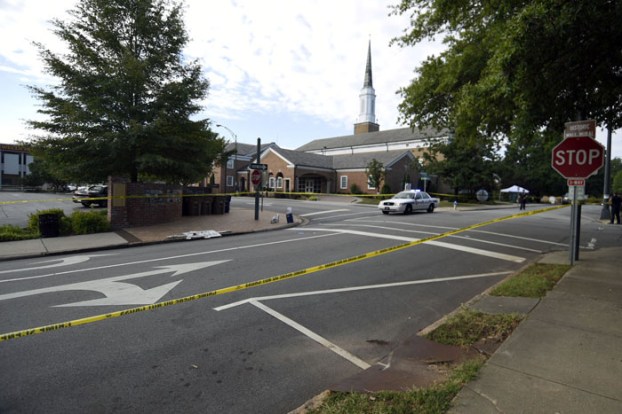 Two men are dead following a shooting in the 100 block of West Fisher Street. The shooting occurred at 2:15 AM Saturday morning. Police Crime scene tape cordoned most of the block with evidence markers scattered about the parking lot behind the Wells Fargo Bank. Saturday in Salisbury. JON C. LAKEY / SALISBURY POST

Salisbury has a crime problem, but hot tempers and a penchant for guns are beyond  the control of City Council and the Police Department. There probably is  more to the incident than a mere disagreement; the investigation by police and the SBI has just begun. Either way, two families are in mourning. One woman has now lost two sons and a grandson. And the entire city is once again rocked by news of violence.

Yet beyond the area police taped off on Church and Fisher streets, business in downtown Salisbury appeared to be going on as usual early Saturday evening. People ate in restaurants, went to see a play, patronized bars. They did so knowing that the Saturday morning shootings do not appear to be random. People who knew each other — or at least knew of each other — had a violent confrontation.

Some people, including candidates for City Council, may accuse the city of doing nothing to address this kind of crime. For the record, the city has hired a new police chief and deputy police chief. Those top officers inherited a department plagued by vacancies and are slowly building it back up. Chief Jerry Stokes reported to the council last month that 11 new officers had been hired, making the department about 87 percent staffed with 10 other vacancies. Unfortunately, five officers are up for retirement.

The Rowan Sheriff’s Office is working with the city to fight crime by allowing off-duty deputies to work city patrols. The Salisbury Police Department has embraced community policing and started limited foot patrols.

Stokes also had a frank discussion with the council in March about the presence of gangs in the city. He said local groups or subsidiaries of the Blood Gang — West Side, Puzo, BBA, 9-trey and Gangster Bloods — are the largest. Crips are the second-largest gang, he said, with subsidiaries that include Kitchen, 8-tre, Grape Street and Watts.

No one has said Saturday’s incident was gang-related, though Facebook posts suggest a connection to Puzo.  Even if gangs are involved, though, they are just one of several problems in Rowan County. In recent years, opioid overdoses have killed more people than bullets.

Whatever precipitated the gunfight that took place Saturday, eradicating the violence that grips segments of Salisbury requires something deeper and more fundamental than police action. Yes, the killer or killers must be caught and prosecuted. What will it take, though, to convince other young men to put down their guns and settle their differences some other way? What will it take for more of these young men to get a chance to grow old?

United Way dollars are helping in our community

By Shela Sapp Special to the Salisbury Post The United Way Campaign is just around the corner. Numerous hours and... read more