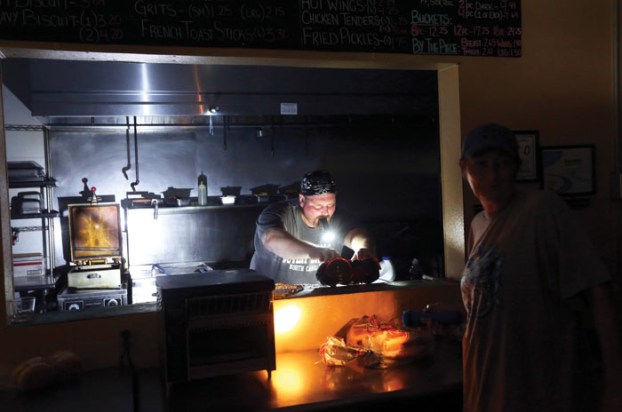 Aaron Howe cooks in the dark kitchen at the Island Convenience Store in Rodanthe on Hatteras Island, N.C., on Friday, July 28, 2017. An estimated 10,000 tourists face a noon deadline Friday for evacuating the island on North Carolina's Outer Banks after a construction company caused a power outage, leaving people searching for a place to eat, stay cool or to resume interrupted vacations. Howe says it is the only place in town to get a meal. Steve Earley /The Virginian-Pilot via AP

A man-made power outage — not an approaching hurricane — forced 10,000 tourists to flee two Outer Banks islands and turned summer vacation into a messy nightmare for many.

Cars lined up Friday to get on ferries, the only way off Ocracoke Island, after a mandatory evacuation order was announced.

Gas stations ran perilously low on fuel and ice, and business owners complained about losing a chunk of their most lucrative time of year due to a construction crew accidentally severing a main transmission line.

“We were really disappointed. You’re used to things like this happening from Mother Nature on Ocracoke, but not from human error,” said Kivi Leroux Miller, who awoke in a hot rental house Thursday morning.

The Lexington resident had to cut short her yearly vacation with her husband and two children, and they were among the last cars on a packed ferry Friday morning.

“There was definitely this sort of sadness with everyone having to leave,” she said.

Ocracoke and Hatteras islands went dark Thursday when a construction company building a bridge between islands drove a steel casing into an underground transmission line.

The company, PCL Construction, was digging at the site Friday to determine the extent of the damage.

Officials said it could be days or weeks before it’s fixed. A better forecast wasn’t expected for another day or so.

Gov. Roy Cooper declared a state of emergency as generators were sent to the islands for the residents who stayed behind. Officials urged people to use power only for fans and refrigerators.

“The situation is stabilizing today thanks to the use of additional portable generators,” Cooper said. “Public safety services have power as do water and sewer. I ask residents and visitors to be patient as everyone works toward restoring the power and getting conditions back to normal.”

The islands, which have about 5,000 permanent residents, rely heavily on the summer tourist season for their local economies. But emergency officials were forced to issue a mandatory evacuation of visitors to Ocracoke Island on Thursday afternoon, with exemptions for some including those who could prove residency.

A similar order was announced forcing visitors to Hatteras Island, south of Oregon Inlet, to be out as of 6 a.m. Saturday. In announcing the Hatteras evacuation, authorities cited safety issues and growing concern about how long repairs to the transmission line would take.

“In a seasonal community like Ocracoke, there’s three to five months out of the year when most businesses are closed,” said Jason Wells, owner of Jason’s Restaurant on Ocracoke Island. “So when you take this hit in July and factor in that you’re only open eight months out of the year, it’s big. It’s a lot more than people even realize.”

While Howard’s Pub nearby was serving a full menu on generator power, owner Ann Warner said business had plummeted as tourists streamed off the island. Her restaurant would usually be packed for Friday lunch.

“This is a man-made disaster, and, yes, people are very upset,” she said.

Tourist Stacy Huggins awoke Thursday in a hot hotel room with no air conditioning, noticed his phone wasn’t charging and realized the power was out.

On Friday, he sat at a dock awaiting the next ferry off Ocracoke Island to help him make his way back to his home in Virginia.

“The island now looks like it looks in November or February,” he said. “To see it take place over the course of a few hours instead of a few weeks is pretty remarkable.”

GOLD HILL — Randall Smith knows he has a life most people would envy. His property off Old Beatty Ford Road... read more