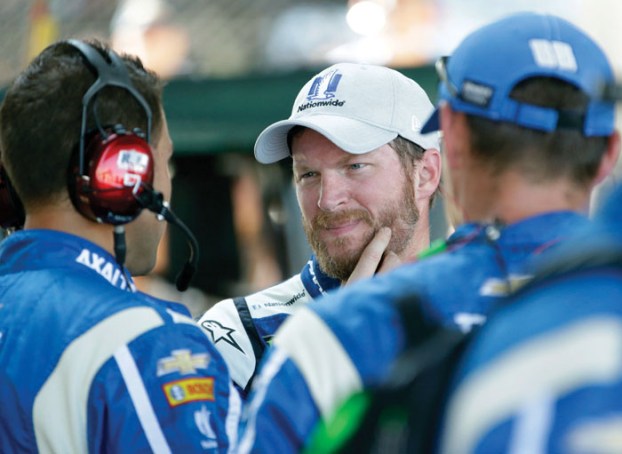 AP Photo/AJ Mast ... Dale Earnhardt Jr., right, talks with his crew after dropping out of the NASCAR Brickyard 400 auto race at Indianapolis Motor Speedway on Sunday. Earnhardt Jr., who has already announced his retirement as a driver, will join NBC next year.

NEW YORK (AP) — Dale Earnhardt Jr. will have a new way to voice his racing opinions next season — on television.

NASCAR’s most popular driver will join NBC Sports Group’s coverage of stock car racing next year and there may be more options once he climbs out of the car for good.

The agreement with NBCUniversal announced Monday will allow Earnhardt to pursue “a wide range of opportunities in the company’s media businesses, including movies, television, podcasts, and other areas” including football and perhaps even the Olympics.

“I’ve always just drove race cars. So this is probably the first real job I’ve had in 20 years,” Earnhardt said on a conference call. “This is an incredible opportunity for me to start an entirely new career.”

Earnhardt has been voted the series’ most popular driver 14 consecutive times and provides some of the most thoughtful analysis in the series. Add those traits to his down-to-earth approach and his desire to succeed and it could be a perfect match. NBC Sports Executive Producer and President of Production Sam Flood said Earnhardt has already contemplated following Chris Collinsworth around for a “Sunday Night Football” game or watching an Xfinity Series race in the television truck just to see how things work.

“His love of the sport and his passion for the history of the sport makes him look at it in a different way,” Flood said. “It’s fun to hear how curious he is about TV.”

Earnhardt got a brief taste of broadcasting last year, working with Flood while he dealt with concussion-related symptoms.

But discussions with NBC didn’t begin until after Earnhardt announced in April he would retire after this season, in part because of his injury history. Two big crashes last summer forced him out of the final 18 races, and he missed two races during the 2012 playoffs also because of concussion-related symptoms. The 42-year-old Earnhardt intends to compete in two Xfinity races next season and plans to be involved in the sport in other ways.

Earnhardt said negotiations began after he decided to leave racing and continued for several months before the two sides agreed to the deal in the past few days.

“I’m excited to be able to finally announce this news,” Earnhardt said. “I’m going to follow Sam’s lead and as prepared be as I can and let him give me the tools to make progress.”

Next year’s NASCAR races will air on either NBC Sports or Fox channels. This year, NBC Sports Group will air the final 20 Cup Series races and the final 19 Xfinity events.

Earnhardt has 26 career victories, including the 2004 and 2014 Daytona 500, putting him 29th on NASCAR’s all-time race winners list. His father, Dale Earnhardt, won seven Cup titles and 76 Cup races in his storied career.

NBC said it was also partnering with Earnhardt on some of his other businesses, including Dirty Mo Media and Hammerhead Entertainment.

On a day series leaders released the first images of a new generation of cars, they also explained how drivers and fans helped create the new look by bringing back some designs from past decades. The result: a sleeker design, higher-performance technology, fewer body parts and presumably safer cars.

Changes include smaller, lower wings, weight shifted to the front of the car, more downforce from underneath the car and reduced costs for teams because the kits will be used from 2018-20.

The cars will be seen publicly and tested for the first time Tuesday on Indianapolis Motor Speedway’s 2.5-mile oval. A second testing session is scheduled for Wednesday. Two-time Indianapolis 500 champion Juan Pablo Montoya and Spain’s Oriol Servia will drive this week.

Series officials also will hold tests Aug. 1 at Iowa, Aug. 10 at Mid-Ohio and Sept. 26 at Sebring.

But there might be almost as much interest in subtle alterations.

The engines will be more visible to fans wandering through Gasoline Alley.

Fewer body pieces should reduce debris on and around tracks following crashes.

Series officials believe the newly-designed side-impact protection will prevent injuries like the life-threatening one Canada’s James Hinchcliffe sustained when a broken suspension pierced his leg in Indy in 2015.

And engineers are still working on a wind screen that could help protect drivers.

“The cars have been built and designed around having some sort of application like that, so at some point between now and the end of the year we’ll test something,” Frye said, referring to the wind screen. “When we get it on, we want to make sure we’ve got it right, and we want to make sure it’s ready to go. At that point, then we’ll decide is it an ‘18, ‘19, or are we going to use it in the future.”

Manufacturers also will be able to conduct tests before teams receive the kits — one for superspeedway ovals, the other for all other race courses — in November.

Teams are scheduled to begin testing in January.

The new kits also could have another effect: generating interest from another engine manufacturer to compete with Honda and Chevrolet.

“I’m not sure if we’re close. I would say we’re closer,” Frye said. “There were some hurdles that we had, and hopefully we’ve removed the hurdles, so there seems to be more enthusiasm about the direction, and they see our five-year plan, they see where we’re going. That doesn’t mean they’re coming. It’s just, maybe, there’s now an opportunity that they could come.”