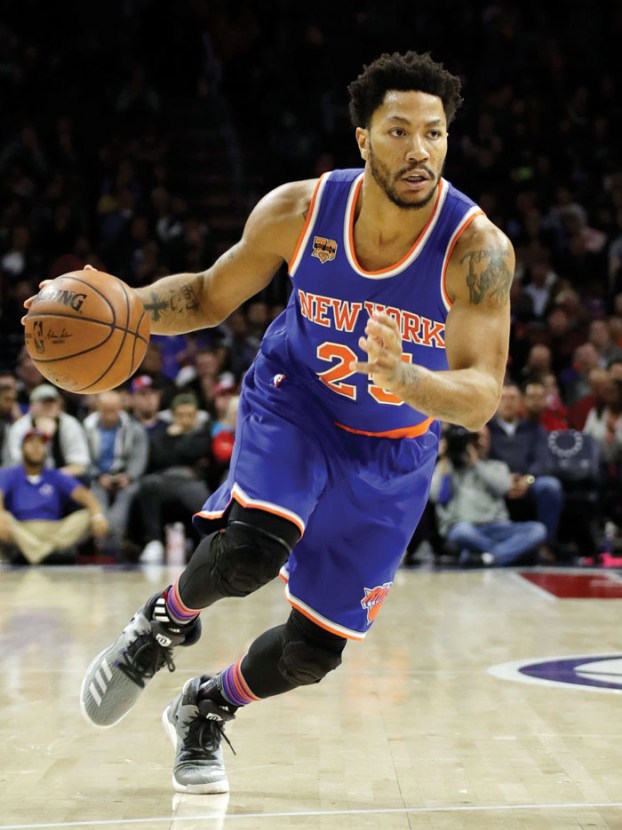 FILE - In this March 3, 2017, file photo, New York Knicks' Derrick Rose drives down court during an NBA basketball game against the Philadelphia 76ers, in Philadelphia. Two people familiar with the negotiations say former MVP Derrick Rose is meeting with the Cleveland Cavaliers. Rose is discussing a potential contract with Cleveland on Monday, July 24, 2017, according to the people who spoke to The Associated Press on condition of anonymity because of the sensitive nature of the talks. (AP Photo/Matt Slocum, File)

CLEVELAND (AP) — For the moment, the Cavaliers have one content, proven point guard.

Free agent Derrick Rose agreed Monday to sign with Cleveland, a person familiar with the decision told The Associated Press. Rose, a former NBA MVP who has battled knee injuries, will get a one-year contract at the veteran’s minimum of $2.1 million, said the person who spoke on condition of anonymity because the team has not announced the agreement.

The deal is expected to be finalized and announced Tuesday.

Rose played for the New York Knicks last season and averaged 18 points and 4.4 assists. The 28-year-old’s role with the Cavs is still to be determined. He could be used as a backup or even start depending on what the team does with All-Star Kyrie Irving, who recently asked for a trade.

Irving’s demands have complicated things for the defending Eastern Conference champions, who were beaten by Golden State in the Finals. They’ll certainly find interest in Irving, but it may be challenging to find comparable talent in return.

That’s where Rose comes in. If healthy, Rose is a dynamic scorer capable of taking over a game, and paired with LeBron James, he could be even more dangerous.

Not long after reports surfaced of Rose’s agreement, James posted a message on Twitter with five rose emojis followed by, “Let’s Rock G!!”

Rose drew interest from other teams. He met with Cleveland’s front office on Monday, when the team promoted Koby Altman to be its full-time general manger after he served as the interim GM since mid-June.

Rose just completed his eighth since being drafted first overall by Chicago in 2008. He was named the league’s MVP in 2011 while with the Bulls. Rose sat out the entire 2012-13 season following knee surgery.

Because the Cavaliers are so far over the salary cap, they could only offer Rose a one-year deal. But the possibility of playing alongside James, who can become a free agent next summer, and to contend for a title will offset any financial concerns for Rose.

NEW YORK (AP) — Dale Earnhardt Jr. will have a new way to voice his racing opinions next season —... read more