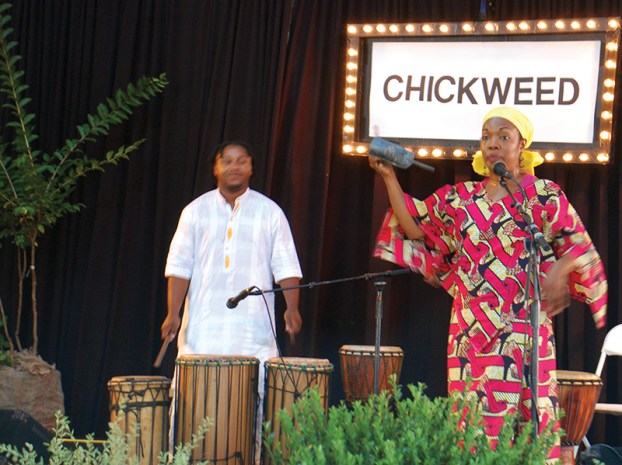 CHICKWEED: The music is great, so is the cause

SALISBURY — How important is CHICKWEED — Celebrating Indestructible Women — to the diehards such as Cynthia Hill?

“This is the only event like this I do,” said Hill, an expert in reflexology, “and I wouldn’t miss it for all the tea in China — and I like tea from China.”

In and outside the Trolley Barn Saturday, CHICKWEED marked its sixth year of celebrating women, their music and art.

“The music is wonderful,” said Connie Christman, who was selling pottery from her Bear Heart Studio.

“And it’s for a good cause,” said Taylor Riley, offering metalworking from Mitchell Custom Fabrication.

Created six years ago by female musicians, CHICKWEED has always raised funds for the Family Crisis Council and its Battered Women’s Shelter. Chief organizer and founder Sue McHugh said 100 percent of the net proceeds went to that cause again this year.

McHugh sort of embodies what CHICKWEED is all about. She is a musician and artist, and she said the event shows how women can be empowered by the arts.

Performers on stage — ten were booked —  started at 4:30 p.m. and went to midnight. There was a silent auction of items such as paintings, a ukulele, hand-decorated gourds and bicycle.

New Sarum Brewery made a special CHICKWEED Pale Ale for the event, which actually included chickweed as an ingredient.

Lauren Rasmussen of Kernersville and Faron Brazis were the featured visual artists inside the Trolley Barn. Brazis also performed as a musician.

Donna and Stephen Pocklington debated with themselves over which of Rasmussen’s artwork to purchase.

“If I had room,” Donna said, pointing to one of Rasmussen’s colorful pieces, “it would be that one.”

A mini-festival of vendors braved the heat outside the Trolley Barn Saturday. As the temperature eased toward evening, more people started arriving

Erin Basinger and Sissie Graham of the Shuckin’ Shack were selling grilled shrimp on a stick, crab dip and chips and shrimp cocktails.

Angela Short was lounging on a chair outside of her “Trailer Trash Girl” mobile truck shop. Yes, it’s a shop of all kind of items inside a 25-foot truck that Short drives to various places on weekends and parks in her driveway during the week.

McHugh used to be Short’s secretary at Wallace Realty, and she told Short, “Why don’t you bring it out to CHICKWEED,” so there she was.

This was artist Susan Corriher’s first year at CHICKWEED.

“I like the charity it benefits and the whole indestructible woman thing,” said Corriher, who lives in Landis and specializes in painting animal portraits and abstracts.

Corriher went half on a vendor’s spot Saturday with her friend April Bryant, also of Landis. Bryant works in resin art, which she applies to to things such as wood panels, plates and jewelry.

“We’re both just trying to get our feet wet and learn as we go,” she said.

Laurie Chase was keeping cool under a tent and selling It Works, which has plant-based products for the body and mind. “And it works, hence the name,” she said.

“I sell my wares to support my habit,” said Trexler, a retired mail carrier. And her habit is making more pretty things.

Christman is a freelance artist and art teacher. Any money she received selling the tie-dye T-shirts she had at her tent was going toward art supplies for the kids at China Grove Middle School.

Christman said she knows a lot of kids from various schools who have needed the support of the Family Crisis Council’s shelter.