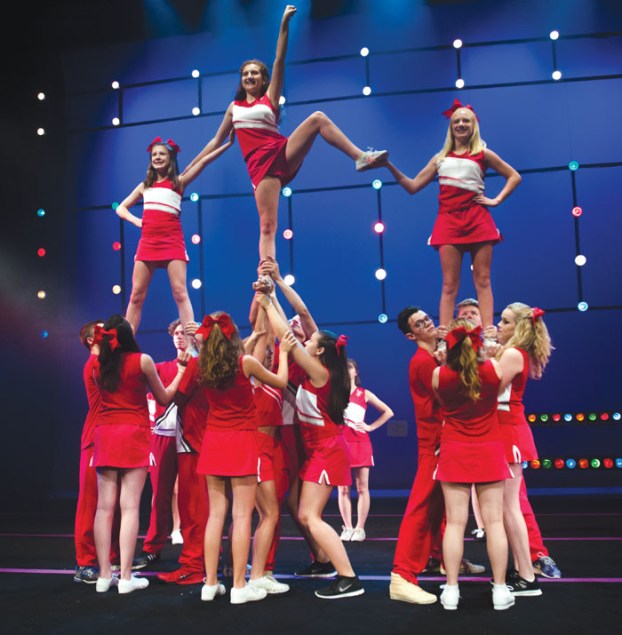 Anleigh Hall, left, Emma Shelton, middle, and Kalista Heizer, right, are raised up during a Truman High School cheer in the Piedmont Players Theatre's production of 'Bring it On' at the Norvell in Downtown Salisbury on July 3, 2017. Kristi Craven/Salisbury Post

Hard work shows in ‘Bring It On’ at Norvell This summer, a number of preteens and high school students in the area have been beating the heat by relaxing indoors, spending the afternoons by the pool, and taking trips to the beach.

But the cast of Piedmont Players Theatre’s “Bring It On: The Musical” has been hard at work — and it definitely shows.

The Norvell Theatre hosts a show that teens can relate to and adults can reminisce about with oh-so-serious high school drama.

While the show is absolutely PG-13, it is not overrun by any inappropriate writing or dancing.

Regarding the dancing, director Reid Leonard has made a bold choice that certainly paid off: at the impressive ages of 18 and 17, first-time choreographers Brooke Baldwin and Tanner Groppi bring a new vivacity to the Norvell stage. They have effortlessly combined dance with cheer to create enjoyable blocking for the just as entertaining cast of “Bring It On.”

The performers, widely double-cast, took on the choreography enthusiastically, easily transforming into a different style to represent different demographics and the separate high schools.

Sara Biles and Lauren Dendy of Elevation Cheer Company have also brought a new and exciting aspect to this production.

The story revolves around a young girl, played by last season’s featured actress Graham Harrington, who is struggling to earn the highly coveted first-place trophy at the National Cheer Competition. PPT decided to (literally) toss some of Rowan County’s best cheerleading talent into the cast.

Biles and Dendy made sure it was done with every bit of the expertise and “wow factor” of an ESPN telecast. However, I’d be lying if I said I hadn’t spent a large part of the show worrying that one of the girls would hit the ceiling of the theater or fall during a stunt. Thankfully, each and every stunt and trick was quite successful.

Even the singers, including mean-girl Skylar (Cortlyn Kerns) and crew leader Danielle (Alaina Newell) manage to lead dances and stunts while still blowing the cast away with their strong vocals.

Bridget (Allison Tesh), a rising junior in high school, was an audience favorite and impressed all with her bold voice while inadvertently causing the hysterical Twig (Sirravada Norng) to fall hard for her.

William Clark returns to the PPT stage as Randall, the “cool guy” at Jackson High who teaches a lesson in morality.

It’s clear that the Norvell Theatre is bringing in more and more talent each year, and the creative team once again did not disappoint. Don’t miss the rest of the shows before they sell out.

The producing partner is F&M Bank

Morgan Warren is a recent graduate of Jesse C. Carson High School who will begin studying theater at New York University this fall.