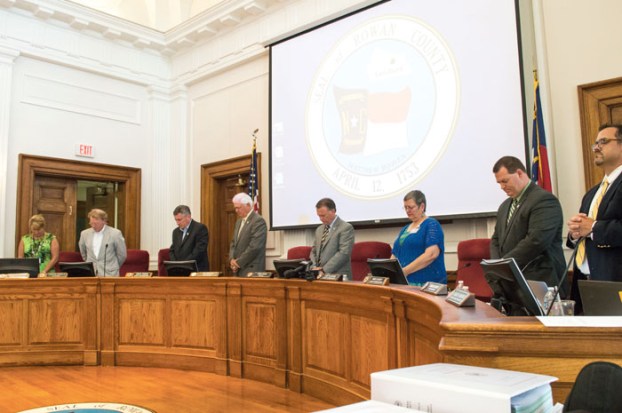 SALISBURY — The Rowan County commissioners’ prayer lawsuit could be headed to the U.S. Supreme Court after a decision Friday by a federal appeals court that found past practices to be unconstitutional.

By a 10-5 vote, the 4th Circuit Court of Appeals ruled that the Rowan commissioners violated the U.S. Constitution by routinely starting their meetings with overwhelmingly Christian prayers from 2007 to 2013. The prayers were offered by commissioners themselves, not a chaplain or other third party.

If commissioners disagree with Friday’s decision and decide to appeal, there’s only one option left — the Supreme Court. And at least two of the five commissioners are ready to appeal.

Known as Lund v. Rowan County, the case has focused on whether the identity of those who lead prayer matters, if prayers proselytize or attempt to convert people at the meetings, and if commissioners coerce people to participate.

Writing for the majority in Friday’s decision, Judge J. Harvie Wilkinson said that Rowan County identified its local government with Christianity and risked conveying a message of exclusion. He said the county commissioners went too far in offering sectarian prayers at the start of meetings.

“Our Constitution seeks to preserve religious liberty without courting religious animosity,” Wilkinson wrote in the majority opinion. “In this quest, our two religion clauses have been a great success, helping to spare Americans the depth of religious strife that so many societies have had to suffer and endure. And yet free religious exercise can only remain free if not influenced and directed by the hand of the state. On this score, the county simply went too far.”

ACLU Legal Director Chris Brook, who represented the plaintiffs in the case, said the ruling is a victory for the rights of all residents to participate in local government without fearing discrimination.

“We are very pleased that the full 4th Circuit has upheld a bedrock principle of the First Amendment: that government should not be in the business of promoting one set of religious beliefs over others,” Brook said in a news release.

The National Center of Life and Liberty represented Rowan County at no charge in the prayer lawsuit.

It’s unclear whether there are enough votes on the Rowan County Board of Commissioners to appeal to the Supreme Court. But two commissioners on Friday said they would vote to appeal. One more vote would be needed.

Commissioner Craig Pierce said he would be willing to appeal the case. Pierce expressed frustration that federal courts had first ruled the prayer practices unconstitutional, then flipped the decision and then flipped again.

“If you go back through the courts enough, sooner or later they’re going to give you the answer you want,” Pierce said.

Commissioner Mike Caskey also said he’d be willing to appeal the case to the Supreme Court. Caskey said he doesn’t believe the commissioners have violated the Constitution. By offering sectarian prayers before meetings, Caskey said, commissioners are only exercising their First Amendment rights.

State Rep. Carl Ford, a former chairman of the Board of Commissioners, said the county should appeal the decision. Ford served as a commissioner during part of the time cited in the prayer lawsuit.

“There seems to be different opinions every time this case is ruled on, and there needs to be a final say as far as the court system goes,” Ford said.

In Friday’s ruling, there was some back-and-forth criticism between the majority and dissenting opinions. For example, Wilkinson criticized the dissenting judges for considering prayer practices only in pieces rather than holistically.

Judge G. Steven Agee, writing the dissenting opinion, pushed back against that criticism.

“The majority’s invocation of balancing factors and viewing otherwise valid principles ‘holistically’ in order to reach a preferred result is no camouflage for its lack of merit,” he wrote. “In short, the majority misapplies Town of Greece’s assessment of how the factors are to be evaluated both individually and in tandem.”

Agee wrote that the majority immediately attached a significance to the fact that lawmakers, instead of clergy members, offered prayers at the start of meetings. Agee said previous relevant court decisions did not attach a particular significance to the identity of the speakers.

“Moreover, the tradition and history of lawmaker-led prayers is as prevalent as that of other legislative prayer givers,” he wrote. “Thus, contrary to the majority’s suggestion, the fact that the Supreme Court has not specifically addressed lawmaker-led prayer signifies nothing.”

Wilkinson wrote that the case is different than the Greece v. Galloway case — in which prayers were ruled constitutional — because Rowan County government officials “exclusively prepared and controlled and delivered” the prayers.

In another back-and-forth, Wilkinson addressed criticism by the dissenters that Friday’s ruling would allow for only generic prayers to a generic God.

“This case involves one specific practice in one specific setting with one specific history and one specific confluence of circumstances,” he wrote. “To extract global significance from such specificity is beyond a stretch.”

With the lawsuit ongoing, the Rowan County commissioners have abstained from leading prayers at meetings. Instead, they have invited Rowan County Sheriff’s Office Chaplain Michael Taylor or his son to offer opening invocations.