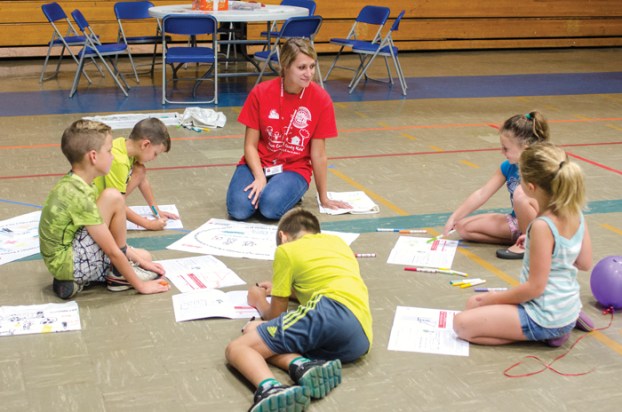 Ashley Maguire, a volunteer at Camp Ready Kids, helps kids fill out booklets about how to be prepared for emergencies during Camp Ready Kids in Salisbury on July 13, 2017. Kristi Craven/Salisbury Post

Ready for anything: Red Cross camp helps prepare children to cope in times of disaster

SALISBURY — The small group of students spends Thursday morning making careful lists, cataloging siblings, parents and pets. Using markers, they write names on a pillowcase and chart maps through their homes and yards.

Ashley McGuire, a volunteer with Camp Ready Kids, sits on the floor of the old YMCA building — which now belongs to First Baptist Church — and asks about their escape plans. Could they get out of their house in less than two minutes? Where would they arrange to meet family?

She encouraged the children to brief their families on the escape route and to practice using it to ensure they could get out in time in case disaster strikes.

Camp Ready Kids, run by local chapters of the American Red Cross, is a disaster preparedness camp hosted across Rowan and Cabarrus counties. The camp is open to rising first- through fifth-graders.

During its one or two days, campers learn what to do in case of a house fire, how to wrap a wound and other basic first aid, what to do if they get lost, and how to prepare and respond to unexpected disasters like hurricanes, floods and tornadoes.

“It gives them a sense of control,” said Heather LeMaster, a Red Cross disaster program specialist.

Disasters such as fires — or even severe thunderstorms — are chaotic. Studies have shown that they can cause a high level of stress in children, who often pick up on and reflect the emotional state of those around them.

But in these instances, knowledge is often power — the more in control children feel, LeMaster said, the less stress they experience during times of fire and flood.

Camp Ready Kids was started nine years ago in Cabarrus County, a product of a local Red Cross employee. Since then, it’s crossed the county line into Rowan.

“We’ve taken it and run with it,” LeMaster said.

Since it is still a growing program in Rowan, camps tend to be smaller and last a single day, as opposed to two days for many held in Cabarrus County.

On Thursday, six campers spread out on the floor of the old gym and studied strategies for disasters they might possibly face. Using a map, they figured out which natural disasters they’d be most likely to experience in North Carolina — hurricanes and tornadoes — and which they’d likely never encounter — volcanoes and tsunamis.

Later in the day, LeMaster said, Central Piedmont Search and Rescue would be coming out to instruct the students on what to do if they find themselves lost in the woods or get separated from their parents in a crowd.

This summer, the local Red Cross is hosting 11 Camp Ready Kids units in Rowan and Cabarrus counties. Thursday’s camp was a partnership with First Baptist Church of Salisbury, which offered space to the Red Cross.

There are still openings for future Camp Ready Kids dates. For more information or to register, visit campreadykids.org.

It’s July and you can expect it to be hot with high humidity that always keeps homeowners busy. Below are... read more