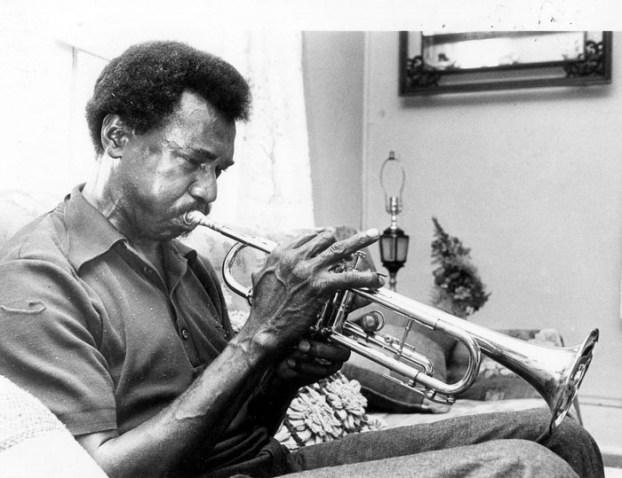 Salisbury Post file photo John 'J.W.' Smith plays the trumpet in this 1977 file photo from his home in Salisbury.

July 12, 1967: When a reluctant Salisburian collided with history

SALISBURY — The Newark, New Jersey, riots of 1967 were among the deadliest in U.S. history, and a man from Salisbury happened to be the unlikely, unwilling spark who set the five days of unrest in motion.

At the time, 40-year-old John William “J.W.” Smith was a cab driver and a frustrated trumpet player, struggling to eke out a living in Newark and looking for clubs in which to play his music.

He cherished his collection of 25 jazz records and was saving money in hopes of getting some new teeth.

But what happened to Smith in Newark on the night of July 12, 1967, would land this “insignificant dude, one little pawn” — the way Smith described himself years later — on the cover of Time magazine.

Smith never meant to be a symbol of racial injustice or civil rights turmoil. That night, he had gotten a late start and was trying to earn enough money in fares just to pay the $16.50 daily fee for use of an independent cab owner’s car.

But near 15th Avenue in Newark, police officers stopped Smith, arrested him and beat him up in the street and at the station. Smith was black; the officers, white.

Residents of a large public housing development saw the cab driver being hammered by the officers. The rumor spread through Newark’s predominantly black Central Ward that Smith had been beaten to death, and an angry crowd gathered and kept growing at the precinct station.

When the protesters refused to leave, the police responded with force and, as the cliche goes, all hell broke loose.

The incident ignited racial tensions that already existed that summer because of other instances of police brutality, not to mention pent-up frustrations with burdensome poverty and a white-dominated power structure.

In the days to come, 26 people were killed — white and black — and some 700 were injured. The looting, burning and vandalism caused close to $15 million in damage, according to reports at the time. Roughly 7,000 state troopers and National Guardsmen were sent into Newark to restore order.

Many newspapers and television stations in New York and New Jersey ran stories Wednesday marking the 50th anniversary of the Newark race riots, and invariably the name of the cab driver, John Smith, came up.

Smith died at the Salisbury VA Medical Center on April 5, 2002, when he was 75. Witt sent the Wall Street Journal reporter a copy of the obituary by email. It noted Smith was “infamous as the catalyst of the riots of 1967 in Newark, N.J., and was featured on the cover of Time magazine and in other publications.”

About a year after the riots, Smith came home to Salisbury for good, though he was still waiting out appeals of a two- to three-year prison sentence he had received for assaulting a police officer the night of July 12, 1967.

It took five years from the time of the riots and four years after his conviction before a three-judge panel of the U.S. 3rd District Court of Appeals decided in his favor.

The judges ruled his indictment for assault and battery on a police officer should never have happened because blacks were excluded from the grand jury that indicted him.

Members of the grand jury in Smith’s case had all been white men and members of the middle and upper class. The population of Newark then was more than 50 percent black.

Smith was born in Sandersville, Georgia, but his family moved to Salisbury when he was 2. His parents were the late Matthew and Mary Emma Smith, who only realized their son was a key player in the Newark race riots after seeing the July 21, 1967, cover of Time.

John Smith graduated from Price High School and attended N.C. A&T University and the Hartness School of Music in New York before joining the Army and serving in Korea, Japan and the Philippines.

He was driving the cab in Newark for about five years, hoping all the time to catch a break in music. A friend told the Post at Smith’s death in 2002 that he could play a trumpet “like the music was coming out of the radio.”

In 1977, 10 years after the Newark riots, Smith sat down with the Post and talked about his experience.

News accounts from 1967 said Smith, driving his cab with a woman passenger in the back, became frustrated with the slow pace of a police patrol car ahead of him.

When Smith tried to swing his cab past the police cruiser, the officers cut him off. A fight ensued, according to the magazine, and things went haywire from there.

Smith’s account 10 years later differed. He said the police accused him of running an intersection, but he claimed the right of way was his.

“He told me I was under arrest, and he told the lady to get out of the car,” Smith told the Post in 1977.  Smith became angry as he sat in the patrol car, waiting on other officers to arrive.

“I was just disgusted because I was losing my fare,” Smith said. “Then they went to work on me. By the time we got to the 4th Precinct, I was immobile.

“… When we got in the station, about 10 of those dudes went to work on me and dumped me in a cell.”

The city was in turmoil by the time Smith secured his release from jail. He was staying at the Hotel Albany on South Street, “and I could look out the windows and see them running down the streets, shooting,” he said.

“One time I was looking out the window and a gun was pointing right at me. It was frightening. The place was in an uproar. I didn’t stand at the window any more.”

Smith never renewed his cab driver’s license and eventually came home to Salisbury and stayed with his dad on West Marsh Street. He worked some construction jobs.

An acquaintance said his health decline started a few years before his death when he fell out of a tree he was trying to cut down.

Every few years, on a new and still grim anniversary of the Newark race riots, Smith’s name surfaces again. He’s part of history.

All he wanted to do was drive his cab and play his trumpet.

FAITH — It’s difficult for Lindsay Hess to say how long it has been since he flew an airplane solo.... read more