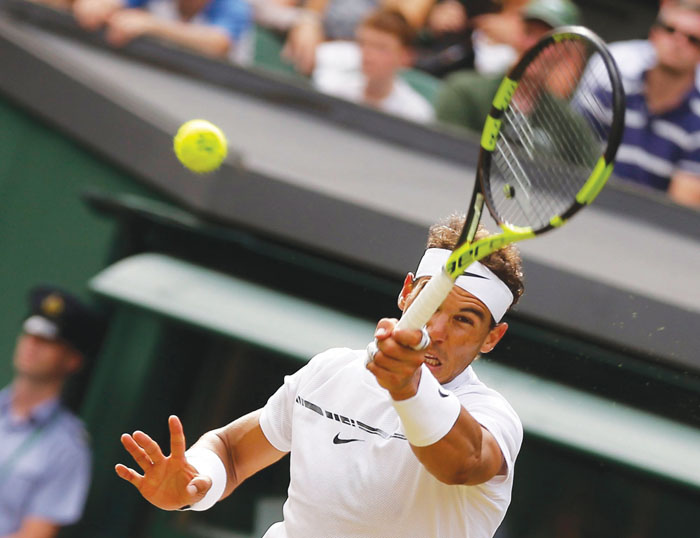 LONDON (AP) — To appreciate fully just how outstanding Rafael Nadal is at the moment — 28 consecutive completed sets won in Grand Slam play — consider what Andy Murray went through at Wimbledon on Friday.

Murray’s title defense appeared to be on shaky ground in the third round, particularly through a stressful stretch at Centre Court against Fabio Fognini, the 28th-seeded Italian who won their most recent encounter and had five set points to force this one to a fifth.

No telling whether the No. 1-ranked Murray, or his vocal backers, could have handled that test. Didn’t need to find out, because Murray was steady enough to grab the last five games and beat Fognini 6-2, 4-6, 6-1, 7-5 as the sunlight faded.

“The end of the match was tense,” Murray said, in his typically understated way. “It was a very up-and-down match. I didn’t feel like it was the best tennis at times.”

The set he did drop was the first ceded so far this week by the Big 4: Roger Federer, Novak Djokovic, Nadal and Murray. That all-conquering quartet combined to win the past 14 Wimbledon championships — half by Federer, three by Djokovic, two apiece by Murray and Nadal.

He is coming off a record 10th French Open title, claiming all 19 full sets he contested in Paris with as overpowering a performance as can be (one opponent quit because of injury in the middle of the second set). Tack on the nine collected at the All England Club, including a 6-1, 6-4, 7-6 (3) victory over 30th-seeded Karen Khachanov on Friday, and Nadal’s set streak in majors equals the third-longest of the Open era.

“I mean, if you don’t hit hard and fast, he’s going to destroy you,” the 21-year-old Khachanov said. “If he has time, he’s dominating with his forehand. And he can play all the angles.”

With his friend Sergio Garcia seated in the Royal Box, wearing the green jacket earned as Masters champion, Nadal put on quite a show. He whipped that big forehand of his; managed to dull serves that topped 130 mph (210 kph) enough to earn 15 break points, converting four; and played skillfully at the net, winning the point on 17 of 21 approaches, 4 for 4 when he decided to serve-and-volley.

The closest Nadal has come to conceding a set over his past 10 matches came in the third. Facing a set point while down 6-5 and serving at 30-40, Nadal produced a brilliant power-and-touch combination, hitting a 122 mph (197 kph) serve followed by a well-disguised drop shot winner.

, while Murray meets unseeded Benoit Paire, a 6-2, 7-6 (3), 6-3 winner against Jerzy Janowicz. Other matchups: 2014 U.S. Open champion Marin Cilic against No. 18 Roberto Bautista Agut, and unseeded Kevin Anderson vs. No. 12 Jo-Wilfried Tsonga or No. 24 Sam Querrey, whose match was suspended Friday night in the fifth set because of darkness.

Against the sometimes-volatile Fognini, who beat him on clay at Rome in May, Murray fell behind 5-2 in the fourth set as dusk approached. Murray figured that if the match went to a fifth, play would be interrupted so the retractable roof could be closed and the tournament’s only artificial lights switched on.

“You’re thinking a little bit about that, as well — a change of conditions and a 20-minute break to think about things before playing a fifth set,” said Murray, whose 2013 title was the first at Wimbledon for a British man in 77 years. “So, obviously, pleased to get off in four.”

He barely did that against Fognini, who mixed in effective drop shots and lobs with pounded groundstrokes.

“I felt superior,” Fognini said. “He didn’t have many options. I had more.”

Fognini, who drew a warning for throwing his racket earlier in the match, was docked a point for sticking a finger in his mouth — chair umpire Damien Dumusois termed it a “visible obscenity” — and that gave Murray a game for 2-all. Rather than discourage Fognini, or distract him, it seemed to provide fuel. Roughly 15 minutes later, he’d won three games in a row, aided by Murray’s double-fault on a break point, and soon held five set points.

Couldn’t convert any, though. And so Murray will play on at the All England Club, much to the delight of the locals.