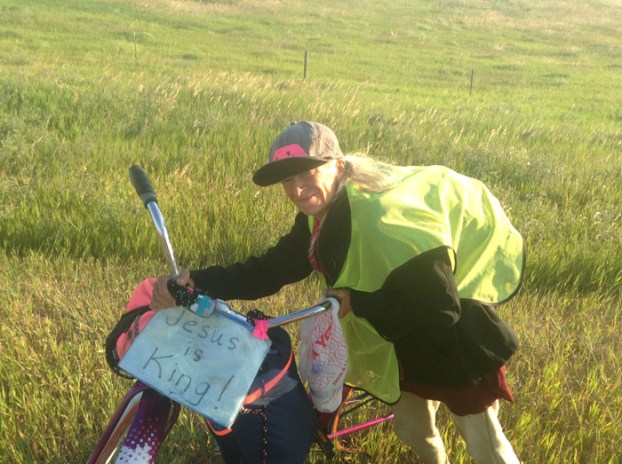 David Freeze/For the Salisbury Post Ali Cooper was pushing her cruiser bike into a headwind and up a hill Thursday morning near Wood, S.D. The Florida resident is traveling the country on a bike she bought for $9 at a yard sale.

Another 'capital of the world' Winner, S.D., proclaims itself the ‘Pheasant Capital of the World.’

Since I left the adventure cycling northern tier maps near Belfield, North Dakota, I had not seen another cyclist. That suddenly changed Thursday.

More on that shortly.

I was up earlier than the sunrise Thursday morning and also found a very strong wind that started as a headwind, prompted by storms in the area overnight.

My night at the Thoroughbred Motel in White River was nice, but I couldn’t wind down to sleep enough. I left White River, again on State Road 44, but for the last time. The road turned and faced east, and the wind became a tailwind, a strong one at that. That set me up to see another sunrise over the Badlands.

Just before getting to Wood, I met Ali Cooper, an older woman who is walking and cycling over parts of the country on a beach cruiser.

Ali is one of the most interesting people I have met on a long bike journey. She came from Palm Bay, Florida, and is going out on her own to see the country and give Jesus the credit for it all.

Ali had an amazing spirit and was so much fun to talk to. I could have stayed much longer, but warm temperatures were coming.

Ali had just visited with the mayor in Wood.

“I was sure glad to see somebody in government who is a strong believer,” she said.

Ali is carrying her stuff in a couple of bags smaller than mine. She bought her bike for $9 at a yard sale. She has already been to Alabama, Missouri and South Dakota, among other states, and is headed for Pierre, South Dakota. I hope to hear again from Ali.

I then rode on through Wood and was about to get to Witten when I saw Sven Fischer of Germany riding toward me. I shared my one line of German with him, “Ich habbe hunger,” which means, “I am hungry.”

Sven said that is an all-important line. We shared information about traveling both ways. Sven is riding from New York City to San Francisco and sounds like he is going to take most of the summer to do it.

Witten was another small town, and I didn’t see anybody except the mail person moving around.

The next town was Winner, “Pheasant Capital of the World.” Sven said it is a real town with a McDonald’s and Subway.

Just as I was leaving Winner, yet another cyclist pulling a trailer rolled through town, but he didn’t want to stop.

The rollers continued yet again all day and there were a couple of late ones that included a slight headwind.

It was definitely another challenging day, but the high temperature only got to an official 95 here in Gregory, where I would spend Thursday night after 81 miles.

I did pass through Colome and Dallas right before entering Gregory. There is not an ice cream shop in town, but there are about six places to buy gas. I saw what looked like a nice grocery/deli, so I headed that way.

My road is now 18/183 and I plan to use it to enter Nebraska in this morning. What I don’t know how to do is find lodging for this evening, but I do know that there are few towns and the fabulous Nilbrara National Scenic River.

I planned to work this out later Thursday night. As for now, my plans are to be in Nebraska for a couple of nights and then on into Iowa.

You may be surprised that I have to start thinking about how the journey will end up and when to head home. Still to check off are Nebraska, Iowa, Minnesota and Wisconsin. I will be back with some plans on how to get it all done.

I hope readers are enjoying the adventure as much as I am. See you back here tomorrow!

By Shavonne Walker shavonne.walker@salisburypost.com SPENCER — Fire investigators said Thursday that an overnight fire that claimed the life of a... read more