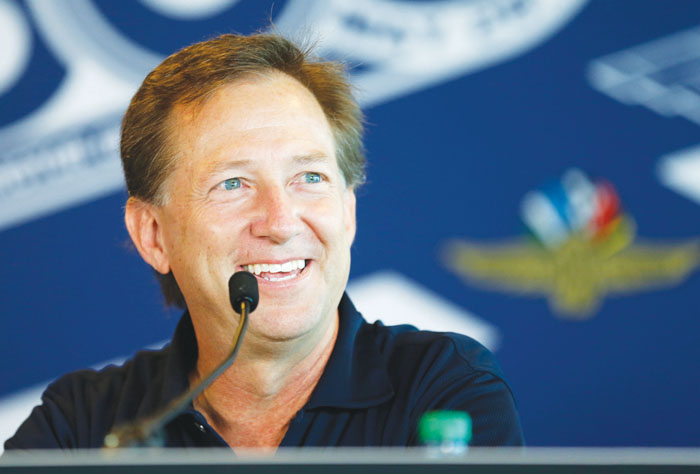 FILE - In this May 18, 2017, file photo, former race car driver John Andretti talks about his battle with colon cancer during a press conference at Indianapolis Motor Speedway in Indianapolis. Andretti is back in the garage after having his spleen and gall bladder removed last month. The former NASACAR and IndyCar driver returned to the team’s Indianapolis headquarters, Indy television station WTHR reported. (AP Photo/Michael Conroy, File)

INDIANAPOLIS (AP) — John Andretti is back in the garage after having his spleen and gall bladder removed last month.

The former NASACAR and IndyCar driver returned to the team’s Indianapolis headquarters.

Andretti’s ongoing battle first emerged in early May when it was announced he had been diagnosed with colon cancer that had spread to his liver. At the time, Michael Andretti acknowledged his cousin was in “excruciating pain” and was upset because it could have been prevented had John Andretti simply undergone a colonoscopy earlier.

The 54-year-old Pennsylvania native said his prognosis is getting better since last month’s surgery.

“I went in the week after my surgery and they basically said, we don’t need to see you for maybe about another three weeks,” Andretti told WTHR-TV in Indianapolis. “Scheduled the next appointment and they said we’ll scan you then. Until then, no chemo, you’re a free man.’”

Andretti begins another round of chemo later this month.

But there’s quite like spending the day in the garage with his 24-year-old son, Jarrett, who competes in sprint cars.

“I’m actually feeling more like a human again. You start losing all the chemo things that go along with it,” John Andretti told the television station. Nothing changes your life more than having to go through all that.”

Andretti held news conferences in Charlotte, where he was undergoing treatment, and Indianapolis in May and it’s not clear whether he’ll make another appearance before NASCAR’s July 23 Brickyard 400.

He may be best known as the first driver to attempt the Memorial Day double — racing 500 miles at Indy and 600 miles in Charlotte in the same day.

He won two races and 37 top-10 finishes in 393 career Cup starts, and he won once in IndyCars.