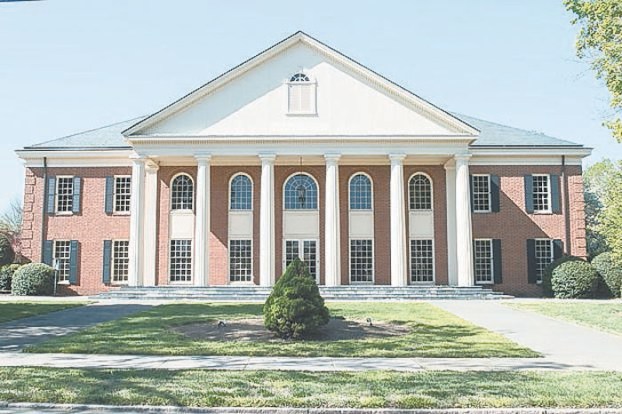 This former bank building on West Innes Street will be demolished to make way for a new downtown Park. File photo

Downtown commons still in planning stage; bank building will come down this summer

SALISBURY — In four to six weeks, D.H. Griffin Cos. of Greensboro should be tearing down the former bank building at West Innes and South Church streets, signaling the start of development of a downtown park or commons.

Before the 1973 bank comes down, all the utilities have to be cut off — electric, gas and water — and some asbestos found in the building will have to be abated.

Asbestos has been found in some tile work and glue in the kitchen and in asbestos glue in the restroom, according to Jason Walser, an employee of the Blanche and Julian Robertson Family Foundation.

This 3.5 acres includes the Bell Tower, the former Wrenn House restaurant, a large parking lot across from the Rowan Public Library and the former bank building, which was originally a First Union Bank.

While a master plan for the property is not final, Walser shared several of the elements a new park will include. Central to the plan will be a dominating, circular lawn or commons.

Walser said it will be “as green a park as possible,” offering a town commons in the truest sense of the words because its goal will be to bring as many people together as possible.

The Robertson foundation wants to create a public-private partnership to pay for and develop the park and an independent board to oversee it. The formation of the nonprofit board could come as early as next week.

Foundation officials aren’t ready to release a name for the park just yet.

“This is a community-led, community-funded initiative,” he said.

So far, the downtown park concept has had total contributions of more than $1 million from at least 45 donors.

LandDesign of Charlotte has been working with the Robertson foundation on the plan. Walser emphasized the master plan is a concept or vision that most likely will evolve as construction proceeds.

The park construction probably will start in early fall. The plan’s full implementation could take one to three years, Walser said.

Some key elements in the master plan include the dominating lawn or green space, public restrooms, a children’s sculpture playground, a water wall, perennial garden, trellis stage, small amphitheater, a dining terrace next to the restaurant, benches, a few paths, new trees, local quarry stone, diagonal parking spots and, around the circular lawn, a garden edge with seating.

The lawn behind the Bell Tower also could be enhanced, making it a home for small gatherings.

The goal is for the former Wrenn House to be a restaurant again. The restaurant building dates back to 1839 and was originally the Salisbury Female Academy.

Efforts will be made to have the public restrooms blend into the new landscape as much as possible. The roof will be grass, for example, and the restrooms would not be visible from Fisher or Jackson streets.

“We have to do it,” Walser said of the need and demand for public restrooms downtown. A key to the restrooms being clean, safe and manageable will be programming and “having as much stuff happening there” as possible, Walser said.

The programming could come from the library, Parks and Recreation Department, and other entities, but the mere presence of people and the park’s use could dictate when the restrooms are open and whether they will work as they should.

Many of the sight lines and entrances to the park will lead the eye toward the iconic Bell Tower.

In April, the Salisbury Historic Preservation Commission approved demolition of the 6,200-square-foot bank building. Walser said a demolition permit still has to be secured along with the asbestos abatement and utility disconnections.

People have made a lot of requests for materials from the building, such as windows and doors, Those will have to be handled through D.H. Griffin Cos., Walser said.

The Maxwell Chambers Trust owned the entire block for more than 150 years. A court decision gave the trust authority to sell the property, but negotiations between the trust and the city of Salisbury on a park proposal fell through.

That’s when a city representative approached the foundation about buying the site and following through with the park.

“I would say it’s moving forward,” Walser said. “… It’s going to be a great thing for our community.”