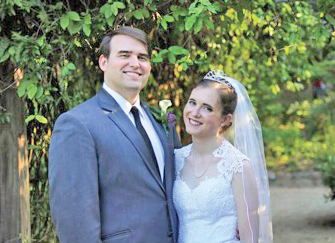 Kaylin Kirby Hunter and Travis Hunter Elliott were joined together in holy matrimony on Saturday, June 3, 2017, by Rev. Billy Towery at Calvary Lutheran Church in Spencer.

The bride was escorted by her father, Mr. Gerald Hayden Hunter, and attended by Ms. Marlena Fernandez of Accokeek, Md., as maid of honor. Bridesmaids included a friend of the bride, Ms. Jenna Boyd of Salisbury, sister of the groom, Ms. Regan Elliott of Charlotte, and future sister-in-law of the bride, Ms. Devereaux Swaim of Salisbury.

The groom was served by Mr. Rex Austin Reynolds III of Durham as best man. Groomsmen included friend of the groom, LTJG Ryan Boaz of Charleston, S.C., friend of the groom Mr. Geoffrey Williamson of Richmond, Va., and brother of the bride, Mr. Alex Hunter of Woodleaf.

The groom is the son of Mark and Rhonda Elliott of Charlotte and the grandson of the late Henry and Jean Elliott of Crewe, Va., and the late Margie and Harold Whaley, also of Crewe, Va. A 2011 graduate of New Covenant School in Lynchburg, Va. , Travis graduated from Elon Univeristy in May 2015 with a Bachelor of Arts in Media Arts and Entertainment.

Following a 12-day cruise around the British Isles, the couple is making their home in Denver, Colo., where Kaylin has accepted a position as a Software Solutions Analyst with Avanade Inc. and Travis is employed as a sports journalist for RotoWire.