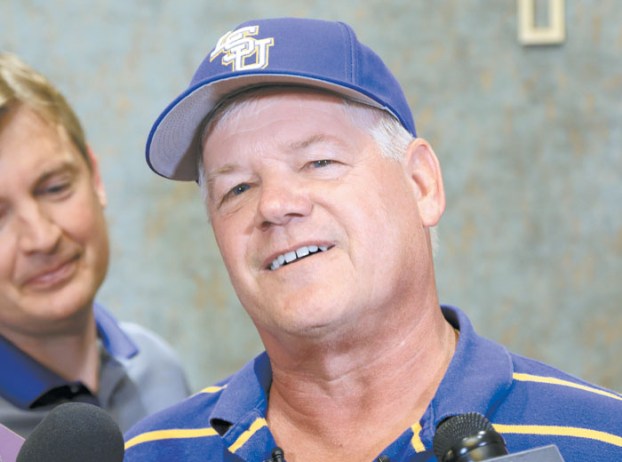 Dr. Jerry Poche' speaks during a media availability in Omaha, Neb., Tuesday, June 27, 2017. The father of LSU all-time wins leader Jared Poche' helped revive an elderly man who was slumped on the TD Ameritrade Park concourse with no pulse during Game 1 of the College World Series finals in Omaha. (AP Photo/Nati Harnik)

OMAHA, Neb. (AP) — It has been a busy College World Series for Dr. Jerry Poche’, the father of star LSU pitcher Jared Poche’.

A family doctor who has been in private practice for 25 years, Poche’ has tended to four people during this year’s CWS: A 6-year-old boy who was hit in the forehead by a foul ball, a fan with a bug in his ear, a man who passed out from apparent dehydration and, in a dramatic scene Monday night, reviving an 87-year-old fan who had apparently suffered a heart attack and was found at the stadium with no pulse.

“I’m just watching the game, and someone comes up and says, ‘Hey, man, we need you again,’” Poche’ said a day later with a laugh. “Whatever. I do what I got to do.”

Poche’ was in Section 117 when he was summoned by Kellie Freeman, mother of LSU second baseman Cole Freeman, in the sixth inning of Game 1 against Florida on Monday night. The elderly man was slumped on the TD Ameritrade Park concourse.

“I see an older gentleman being held up by his family, and they said he’s weak,” Poche’ said Tuesday. “He wasn’t weak. He didn’t have a pulse, and he had (laboring) respirations. He was dying.”

Poche’ said he began doing chest compressions, and Jimmy Roy, a firefighter who is the father of LSU strength and conditioning coach Travis Roy, performed mouth-to-mouth resuscitation for five to seven minutes until medics arrived.

“He started breathing on his own a little and his pulse came back, and we were fortunate we were able to revive him,” Poche’ said.

LSU spokesman Bill Franques said the man was a Florida fan who had an apparent heart attack.

Nebraska Medical Center spokesman Taylor Wilson said the man, who was not identified, was in good condition. He did not want to speak with the media, Wilson said, but his family was very appreciative of the effort to help save him. The Advocate newspaper of Baton Rouge, Louisiana, first reported the medical emergency.

Jared Poche’ was tabbed as the starting pitcher Tuesday night as the Tigers tried to even the best-of-three CWS finals at a game apiece. Dr. Poche’, who is from of Lutcher, Louisiana, was hoping for a quiet night on the medical front so he can focus on the game.