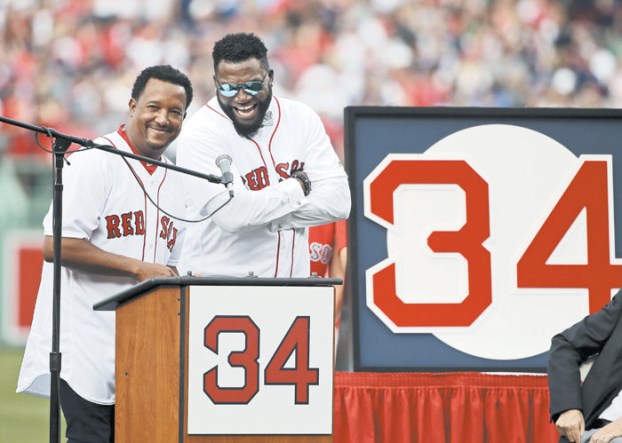 BOSTON (AP) — David Ortiz stepped up to the microphone, wiped the tears from his eyes and waited for the sold-out Fenway crowd to shout “Papi!” a few more times.

The Red Sox waited at the top of their dugout. The Los Angeles Angels tipped their caps. Friends and family and dignitaries from two countries lined the infield. Three World Series trophies glistened in the twilight sun.

Hall of Famers Carl Yastrzemski, Pedro Martinez, Wade Boggs and Jim Rice — whose numbers preceded Ortiz’s to the Fenway facade — were the only ones who could know how he felt.

“It’s an honor to get to see my number right next to all those legends,” Ortiz said before his No. 34 was unveiled along the right-field roof boxes on Friday night.

“I remember hitting batting practice on this field; I always was trying to hit those numbers. But I never thought about having my number up there,” he said. “Every player that is up there did things that are very, very special for this ballclub and this community.”

Ortiz retired last season as one of the most productive offensive players in franchise history, and the single-most important player to wear a Red Sox uniform in a century. With three World Series titles — including the 2004 championship that ended an 86-year drought — Ortiz dragged the ballclub out of its dynasty of disappointment and gave a fresh generation of Bostonians reason to fall in love with the Red Sox anew.

But it was Ortiz’s defiant speech after the Boston Marathon bombings that cemented him as a civic hero and helped prompt the Red Sox to retire his number less than a year after he retired. As a nod to his foul-mouthed challenge to those who would test the city’s resolve, Ortiz took the microphone on Friday with the welcome, “This is his (pause) city.”

“There wasn’t an empty seat,” Ortiz told reporters afterward. “It made me feel like one of the important games we had where the fans wanted to be there from the very beginning and show love and support. It was pretty amazing.”

Ortiz is the 10th Red Sox player to have his number retired, and he was joined by four of the others, plus family representing the ones who couldn’t be there. Also recognized during the ceremony were representatives from the Dominican Republic, the city of Boston, and family of Minnesota Twins Hall of Famer Kirby Puckett, from whom Ortiz adopted both his No. 34 and his ever-present smile.

“Thank you, Lord, for allowing me to give Boston the greatest gift ever: my compadre, David Ortiz,” said Martinez, who helped convince the Red Sox to sign Ortiz in 2003 and then joined with him the next year to win the title. “You are a great ambassador of the game. I don’t have enough words to say today how proud I am, and how proud of a papa I feel today. “Yes, he is ‘Big Papi.’ But I feel like ‘Grampa.’”

Current second baseman Dustin Pedroia, Ortiz’s teammate on the 2007 and ‘13 World Series champions, came out of the dugout to be enveloped in a giant bear hug.

“You’re not our teammate, you’re not our friend. You’re family,” Pedroia said. “And it will be like that until the day you die.”

With that, Ortiz broke out the handkerchief.

Much like it was last season, when Ortiz went on his farewell tour, the ballpark was decked out in his honor, from a five-story silhouette hanging from the concourse ramp outside to the No. 34 mowed into the outfield grass. Fans were given posters with the No. 34, and it was painted onto both on-deck circles.

After both the Dominican and U.S. national anthems — each accompanied by a giant flag covering the Green Monster — Ortiz took a ball from ex-teammate Tim Wakefield and threw (somewhat wildly) to former catcher Jason Varitek.

The beloved slugger shook hands with virtually everyone on the field as he left it, accompanied by video from the careers of the other 10 players with their numbers retired. (Jackie Robinson’s No. 42 has been taken out of service by every team in baseball.)

Although the Red Sox have offered Ortiz a spot in the organization, he told reporters that he has stayed away from the team since his retirement to avoid being a distraction.

“I told myself, ‘Give everybody their space,’” he said. “But it’s going to happen.”