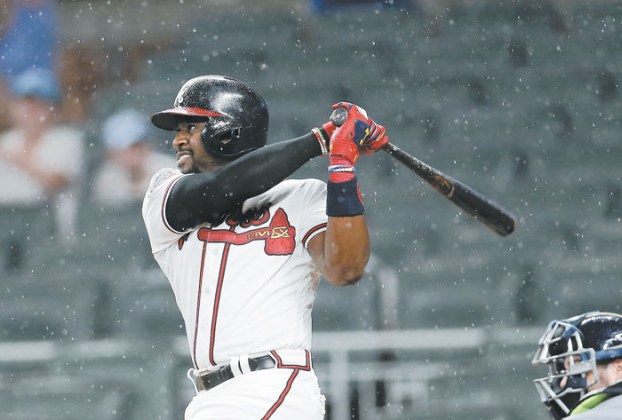 Atlanta Braves' Brandon Phillips (4) drives in a run with a double during the fifth inning of the team's baseball game against the Milwaukee Brewers on Friday, June 23, 2017, in Atlanta. (AP Photo/John Bazemore)

ATLANTA (AP) — Mike Foltynewicz won his fourth straight decision at home, shortstop Dansby Swanson made a pair of outstanding defensive plays in the ninth inning and the Atlanta Braves beat the Milwaukee Brewers 5-4 on Friday night for their sixth win in seven games.

Foltynewicz (5-5) gave up one run, four hits and three walks in five innings with nine strikeouts, improving to 4-0 with a 2.17 ERA in his last five starts at SunTrust Park.

Brandon Phillips homered and drove in two runs, and Arodys Vizcaino earned his first save since last June 26 against the New York Mets.

Eric Thames doubled leading off the ninth, and Domingo Santana hit a two-hopper to the second-base side of Swanson, who spun and threw out Thames at third. Travis Shaw flied out to the left-field warning track as Santana advanced, and Manny Pina lined out to Swanson, who made a diving backhand catch in the shortstop hole, for the final out.

Atlanta third baseman Johan Camargo went to a knee for a backhand stab of pinch-hitter Jesus Aguilar’s hard-hit grounder in the eighth and threw to second base, starting an inning-ending double play.

Foltynewicz enjoyed some rare success against left-handed batters, who were hitting .348 against him coming in. He held Eric Sogard, Eric Thames, Travis Shaw and switch-hitter Nick Franklin to a combined 1 for 9 with two walks and four strikeouts.

Jimmy Nelson (5-4) allowed four runs, six hits and three walks in five innings. He had gone 4-1 with a 2.24 ERA in his previous nine starts.

Atlanta, which has won three straight, took a 2-0 lead in the first when Phillips homered and Tyler Flowers got an RBI on what could have been an inning-ending double-play grounder. Sogard fielded the grounder to second and flipped to shortstop Orlando Arcia, who dropped the ball. Second-base umpire Ed Hickox ruled Matt Adams out at second, but the call was overturned on video review, causing Arcia to be given an error.

Milwaukee made two errors, raising its NL-leading total to 58.

Keon Bronxton’s 12th homer cut the Brewers’ deficit in the fourth, but the Braves opened a 4-1 lead in the fifth when Phillips hit an RBI double and scored on Flowers’ single.

Santana had an RBI single off Sam Freeman in the seventh, and Swanson singled in the run against Brent Suter in the bottom half. Arcia hit a two-run double against Jose Ramirez in the eighth.

ON THE MEND, QUICKLY

After a CT scan and meeting with Braves team physician Dr. Gary Lourie, Freddie Freeman said his broken left wrist is 80-90 percent healed, up from 50 percent last week. The improvement led Freeman to move up the timetable of his return nearly two weeks on July 6 at NL East-leading Washington. Freeman wants to play three to four games on a rehab assignment and return as the starting third baseman.

Brewers: LF Lewis Brinson was in pain after getting hit on the left hand by a fastball from Ramirez in the eighth but stayed in the game.

Braves: LF Matt Kemp was held out of the lineup to rest his left hamstring. Kemp left Thursday’s 12-11 win over San Francisco after singling in eight-run fifth inning. He missed two games last weekend with a similar injury and was on the 10-day DL in April with a strained right hamstring.