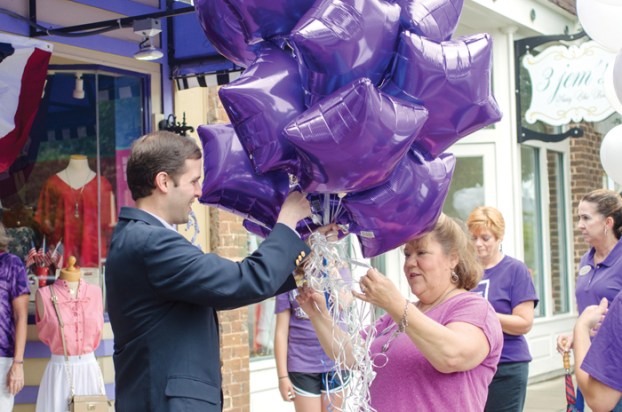 Wednesday was the second straight year for Paint the Town Purple.

“Last year was the first time we had done it, and it was such an awesome feeling when we looked up and down the street and all you could see was a sea of purple and white balloons,” said organizer Teresa Dakins, who works for Trinity at Home.

“People don’t understand the disease,” she said. “There’s a stigma with it, and people don’t really understand it. We’ve got to kind of take that stigma away.”

The Alzheimer’s Association describes the disease as a type of dementia that causes problems with memory, thinking and behavior. Symptoms develop slowly, the association’s website states. An early, common symptom is difficulty remembering new information, but the disease is not the only cause of memory loss.

There is no cure for Alzheimer’s disease.

Caitlyn Haffey, who works for the Alzheimer’s Association, said most people are at least indirectly affected by the disease.

“More than likely, you know a neighbor or a friend or a friend of a friend who’s been impacted by Alzheimer’s,” Haffey said.

She said more than 160,000 North Carolinians live with the disease. The greatest known risk factor is getting older, according to the Alzheimer’s Association.

For local help with Alzheimer’s, Dakins recommended calling Trinity at Home at 704-603-2776.

Boys State of politics: Mock elections ring true to life as high school boys take up the cause