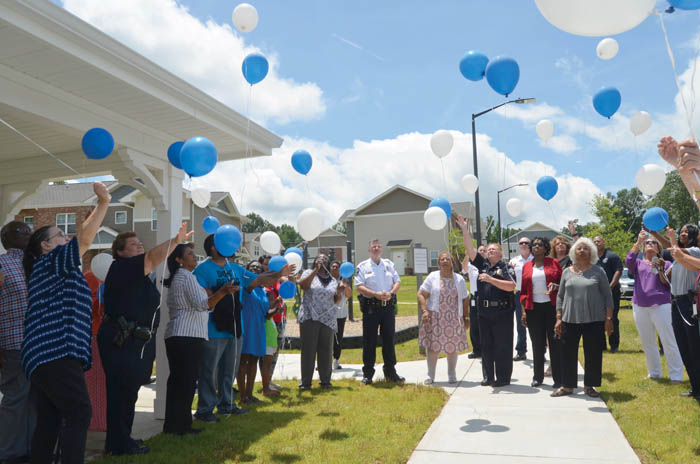 SALISBURY — It’s clear Salisbury Police Sgt. Mark Hunter was a man who loomed large when he patrolled the West End community. His sudden death in 2013 left a void in the community that persists.

Members of Hunter’s family, including his wife and children, attended a ceremony Monday to dedicate a room in the community building at Brenner Crossing Apartment homes in memory of the longtime patrol officer.

The ceremony was like walking down memory lane and a little bittersweet with a few “Hunter-isms” thrown in the mix as some people recalled stories about the officer. A firefighter joked about Hunter going to the store for snacks or what he called a “sniggle snaggle” and a “belly washer,” or something to drink.

Those gathered released blue and white balloons before a reception in the community room.

“It shows how much he was loved in the community,” said Mark Reese, Officer Hunter’s oldest son.

“I liked that they dedicated the room. It’s heartwarming. I appreciate everybody who showed love and support,” Reese said.

Police Chief Jerry Stokes said although he never met Hunter, he’s learned so much about him through the officers who did work with him.

“Everyone respected him,” Stokes said.

Stokes said he learned from Mayor Pro Tem Maggie Blackwell that the West End community had come to be known as “Huntersville,” named after the officer.

He said what impressed him about Hunter was what others said about his character. Stokes spoke about how the officer was known as someone who was kind to young children, even buying them snacks at McLaughlin’s store. Hunter would check on widows or the elderly in the community.

Joyce Smyre was one of those widows. She said teens would gather in the streets and think about doing wrong, but when Hunter would drive through the area they would all scatter.

She asked him to check in on her periodically after her husband died. She has lived in West End for more than 50 years.

“We truly miss him,” Smyre said.

Carolyn Rice said she always felt safer when Hunter was patrolling her neighborhood.

Dominique Luster, another of Hunter’s children, said the stories let the family know that her father has not been forgotten.

“It makes my heart smile,” she said. “I love the way everybody loved him. I miss him dearly.”

Her husband and daughter, Destiny, whom Hunter nicknamed Squeak, were also on hand for the ceremony.

Latasha Reese, another sibling, said she’s heard a lot of stories about her father over the past few years.

“When people do good, it shows in the community,” she said.

Latasha Reese said she misses a lot about her father including the things he used to say and do.

Two other siblings — Robert and Omar — were unable to attend the dedication because of the military and work, respectively.

Hunter’s wife, Joyce, said it was an honor that the community would name the room after her husband.

“He loved this community,” she said.

Police Officer A.L. Bouk worked with Hunter when he was with the gang unit and Hunter was with the drug interdiction team.

“It’s always great when the community takes the time to remember someone who served for so long,” Bouk said.

He said Hunter was a great friend.

Salisbury Fire Battalion Chief Chris Kepley said she always felt safe responding to some scenes when Hunter was there.

“He used to call us ‘fireheads,’ and he always kept us laughing,” she said.

DeeDee Wright, a community advocate and resident of West End, said Hunter’s presence has been missed.

“He appeared fearless, but he was very kind,” Wright said. “We miss him tremendously.”