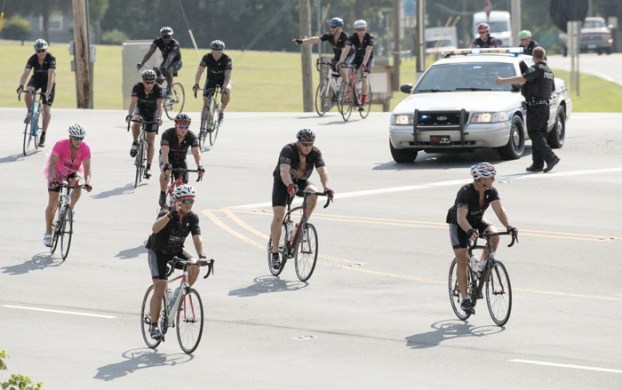 The riders make the turn onto US 29 from Main Street in China Grove in a previous year's ride. The funds raised during the ride will go to assist the family members of those who have died. Jon C. Lakey/Salisbury Post file

Baker once again takes to his bike in Carolina Brotherhood Ride

SALISBURY — Jay Baker, a battalion and division chief for the Salisbury Fire Department, will take part again this year in the Carolina Brotherhood Ride.

On June 13, the second day of the weeklong ride, cyclists will ride into Rowan County and make a rest stop at Rockwell Rural Station 51 before arriving at Locke Fire Department on N.C. 150 and staying overnight at Grace Lutheran Church.

That leg of the trip is in memory of Locke Fire Department Lt. Chris Phillips, who died in 2015 after responding to an emergency call.

The third day of the ride will have an early rest stop at Station 5 of the Kannapolis Fire Department.

The annual ride, now in its sixth year, raises money to support families of firefighters, law enforcement personnel and emergency responders from North Carolina and South Carolina who have lost their lives in the line of duty. The ride also raises awareness of first responders in general.

This year’s ride will be from June 12 to 17, covering a 625-mile route through the two states from Smithfield, North Carolina, to Beaufort, South Carolina.

Baker has been a participant since the inaugural ride in 2012.

The routes change each year. Follow the Carolina Brotherhood Ride on Twitter (@CarolinaBhood), on Facebook accounts and also on its website http://carolinabrotherhood.com/, which will have a live tracker of where the cyclists are each day.

Here is a daily itinerary for this year’s ride:

Cyclists will stay overnight at the N.C. National Guard Armory in Southern Pines.

• June 16: Anderson to Columbia, 121 miles. Rest stops, all in South Carolina, will be in Due West, Greenwood Fire Station 1, Saluda Fire Department and Batesburg-Leesville Fire Department.

The last overnight stay will be at the Burton Fire Department.

By Dr. Mari Maristany Rabies. For those who are baby boomers, those of the greatest generation, and back through history,... read more