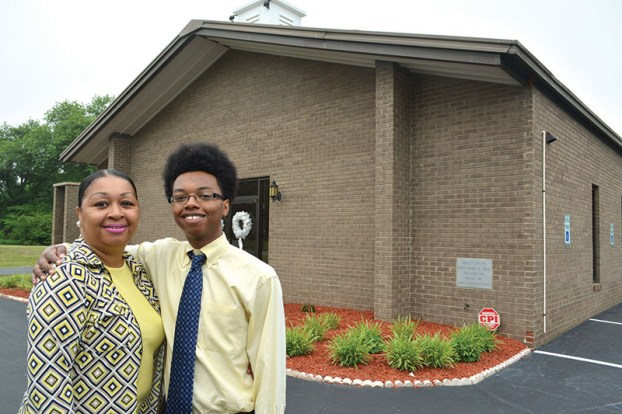 Joshua Ruggs and his mom, Karen Brown, in front of Dorsett Chapel UCC, where she is assistant minister. Joshua credits his mom for keeping him focused on his education and his faith — the two most important things in his life. Susan Shinn Turner/For the Salisbury Post

• “My sons know Mom don’t play when it comes to school. That will get them into doors. … I want them to not be a statistic, but to do well.”

• “You know I love to cut waste in the budget, but this is more important than money.”

— State Rep. Carl Ford, who opposes a proposal in the N.C. Senate’s budget to combine some of the 100 county social services departments into no more than 30 regional agencies

— David Karczewski, who is trying to raise money to travel to India to undergo a new treatment for multiple sclerosis, which he has been battling since 1998

• “No matter what it takes or no matter what I’ve got to do, I’m going to get justice for my daughter. I just want them to come forward. I want peace.”

— Shequita Woodberry, whose daughter A’yanna Allen was shot to death while she slept in her grandmother’s bedroom when someone sprayed the front of the house with bullets, a case for which law enforcement authorities will erect a billboard
asking the public for information to help find the killer

• “I still get to do about what I want in this nice little quiet place. If I had kept a diary, I would have had a good book.”

— John Yelton, a lifelong resident of Gold Hill, relating stories about the history and people of the town

— Shauna Hardy of Newcastle, England, whose family was at the Ariana Grande concert in Manchester when a suicide bombing killed 22 people and injured 59

By Sharon Randall On the eve of our 12th anniversary, my husband and I attended a wedding for a couple... read more