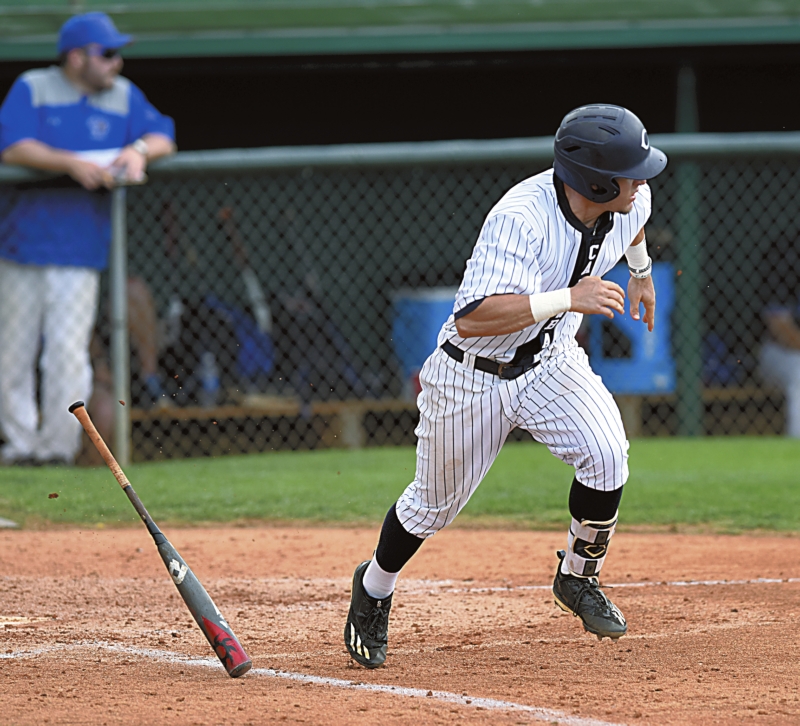 SALISBURY — Right fielder Luke Setzer was a good player his first two seasons at Catawba, but no one really saw this coming.

Setzer’s breakout junior season has included a South Atlantic Conference Player of the Year plaque, and All-America honors may be in his future. Setzer is batting .427 with 18 homers, 18 doubles, 66 runs scored and 53 RBIs — as a leadoff hitter.  He ranks second in Division II in total bases, third in hits and 10th in runs scored. He’ll lead the Indians into their Southeast Regional opener tonight at 7:00 against UNC Pembroke.

“It’s the first time in my life I’ve ever won any kind of offensive award,” Setzer said.  “It’s awesome. It’s hard to believe this has happened for me at such a high level.”

Setzer, by all accounts, has made it happen.

“He’s just getting what he’s earned,” Catawba coach Jim Gantt said. “This guy is a coach’s dream. For Luke, every practice and every game is the seventh game of the World Series. When you have that kind of mentality, when you’ve got the kind of work ethic and level of conditioning that he has, things tend to work out for you.”

Making the East Rowan High graduate’s sensational season more remarkable is the fact that he suffered a broken leg in fall workouts. Actually, it was that devastating injury  that helped transform him from good to great.

“It happened on Sept. 30,” Setzer  said. “We were doing rundown drills between third and home. I changed direction, my cleats caught, and my fibula popped out the back side of my leg.”

A month later, six screws and a metal plate were inserted in Setzer’s wounded limb, and a healing process was under way. Setzer was in a cast before progressing to a walking boot. He got around campus with the aid of a scooter for a while. He didn’t take his first normal steps until Nov. 17, with the season a little more than three months away.

“I was irritable and moody, and then I wasn’t going to my rehab workouts as often as I should have,” Setzer said. “It was Adrian Gantt (Coach’s Gantt wife and a Catawba softball coach) who sat me down and helped me. She got on me. She told me I could either let the injury kick my dream or I could kick the injury. That was the turning point. The injury actually helped me. It changed me. It made me who I am right now.”

Setzer was an ordinary human being in high school. East Rowan coach Brian Hightower had solid varsity teams in 2011 and 2012, and Setzer stayed on the jayvees as a second baseman.

Setzer cracked the varsity starting lineup as a junior in 2013, getting most of his playing time  at catcher. He batted .275 with no homers and 10 RBIs.

“Luke and I were lifting partners at East Rowan,” said lefty Connor Johnson, who has a 15-7 record in three seasons at Catawba. “He was kind of a small guy then, at least until he was a senior. I was out-lifting him by a little bit.”

It started coming together for Setzer in the offseason between his junior and senior years. As a senior outfielder, he batted .349 with four homers and 23 RBIs and made the All-Rowan County team.

“He’d gotten so much stronger and so much better that people were accusing him of using steroids,” Gantt said. “As a junior he was just an OK player, but  he had always been willing to put in the work. Once he got stronger, you could see the tools he had — good speed, good power, strong arm.”

Setzer blossomed so late that almost no one noticed. His only college offer during his senior year came from Belmont Abbey College. The Crusaders offered $2,000 in academic money.

But then Rowan County’s 2014 American Legion summer got under way. Setzer belted three doubles against Eastern Randolph. He hit a three-run homer against Kernersville. He smashed a grand slam and drove in seven runs against Southern Rowan. He had four hits against Mocksville. He was making diving catches and throwing out runners from center field every night.

Fortunately, Gantt coaches the Rowan Legion team as well as Catawba, and he knew Setzer could help the Indians. Catawba didn’t have any baseball scholarship money left, but the Indians were able to put together an academic package for Setzer. He “signed” with the Indians in late June at Staton Field. What’s happened since then gives hope to every under-recruited player.

Setzer earned a starting job as a freshman, batting .290 with 40 runs scored and 31 RBIs for a regional-champion team that finished as World Series runner-up.

As a sophomore, Setzer hit .277, but he boosted his run production and belted nine homers. He hit for the cycle on a memorable day against Mars Hill.

“Luke’s been a key guy for us for three years because he has this great mentality to work hard at baseball every day,” Catawba first baseman Chance Bowden said. “But this year he’s just been unbelievable. He got off to such a great start that it raised his confidence. Plus, the injury was an eye-opener for him. He saw how quickly baseball can be taken away. He appreciates it more now.”

Setzer has been virtually unstoppable.  He was SAC Player of the Week three different times. In a February weekend series, he batted .714 with 10  hits and three homers, and he’s never looked back.

“There was one bad week for me down in Florida,” Setzer said. “I started pressing, trying to do too much. Talking to (Catawba’s star hitter the last two seasons) Will Albertson got me back on track. I just needed to start grinding out at-bats again, doing my job, getting on base.”

Setzer (6 feet, 180 pounds) says that physically he’s not that much different than he was as a freshman, but he’s gotten smarter. He learned a lot about the nuances of baseball from serving as an assistant last summer. He was in the dugout with Gantt and the other Rowan coaches on a run that lasted all the way to the national championship game. Setzer’s younger brother, East Rowan star Hayden, was one of Rowan County’s players.

“I’ve learned a lot of little baseball tricks,” Setzer said. “I’ve learned to stay calm and I’m letting the game come to me better than I used to. I’ve been on time as a hitter. Not late and not early.”

In Catawba’s last game prior to the regionals, the Indians lost at USC Aiken, scoring only two runs. Both runs came on solo homers by Setzer. He was behind in the count on both at-bats, but he socked a curveball and a slider out of the ballpark with two strikes on him. So he’s still evolving as a hitter. He’s not just a guy who can cream down-the-middle fastballs.

“It’s funny because I don’t ever hit homers in batting practice, maybe two all year,” Setzer said. “I just keep working on a backside approach in practice. But in the games, sometimes the homers just happen.”

The long balls and the accolades haven’t changed Setzer. He’s still a great teammate, still a guy who would rather go 0-for-5 and win than go 4-for-4 and lose.

“When you’re one of Luke’s teammates, he’d die for you,” Johnson said. “He’d do anything for a teammate.”

NOTES: Setzer will be swinging a wood bat this summer. He and Bowden will be teammates on the Gastonia Grizzlies in the Coastal Plain League, one of the top summer circuits for college players. … In the Southeast Regional, hosted by top seed Mount Olive, fourth-seeded Catawba (37-15) will send lefty Russ Weiker (4-3), the Indians’ most experienced big-game pitcher, to the mound against fifth-seeded UNC Pembroke (40-15) at 7 p.m. tonight. … “We’ve got the top three teams in the country in our region,” Gantt said. “If we win our first one, it’s like, ‘Hey, congratulations, now you get to play the No. 1 team in the country (Mount Olive).'” …  Admission is $10 per day.  All-session tickets are available for $35.  All seating is general admission. … Freshman Hunter Shepherd (8-0) will likely hurl on Friday for the Indians in the five-day, seven-team, double-elimination tournament. “I think we’re all tired of being known for winning conference championships,” Setzer said. “We want more.”