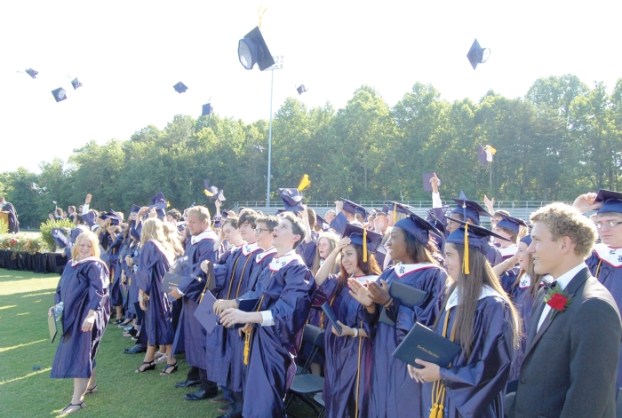 The East Rowan High School Class of 2015 celebrates its graduation in the school's football stadium.

Editorial: Being No. 1 still matters

The competition to be No. 1 academically in high school isn’t marred by the top spot itself. Instead, what appears to be fueling principals’ consternation is the impact of weighted grades on students’ course selections. Time and again, the carrot of an “A” that’s worth more than the standard 4 points sidetracks students from courses that better fit their interests.

As the Rowan-Salisbury Board of Education reviews whether to continue to name valedictorians and salutatorians,  board members should look at different ways to calculate class rank. Doing away with the No. 1 and 2 honors won’t stop competition.

Principals who took this issue to the school board last week say top students carry their competitive spirit too far, enrolling in Advanced Placement courses solely for the weighted grades — not because they’re interested in the courses. An A in AP European History carries more weight than an A in drama, for instance. Top students these days graduate with GPAs well over the 4.0 that used to be the gold standard of academic achievement.

Schools have struggled with this issue across the country. Citing cutthroat competition among top students, several schools have opted to give the honor to more students. For instance, Washington-Lee High School in Arlington, Va., named 117 valedictorians out of a class of 457 students a few years ago, giving the honor to anyone with 4.0 average or higher. Meanwhile, some schools have stopped naming valedictorians and salutatorians, while others stopped ranking students altogether.

Top performers deserve recognition, be it in academics, sports or any other field. Building on the tradition of naming all-county athletic teams, the Salisbury Post decided about 30 years ago to also recognize students who excelled academically. Guidance counselors help the Post name four students from each high school to our All-County Scholars team, based on weighted grade point average, SAT/ACT score and class rank. The students are honored in the Post’s graduation section.

However, the Post stopped naming a No. 1 scholar for the whole county several years ago because schools’ course offerings varied so much; students at the school with the most AP courses had an unfair advantage.

And in vying for valedictorian, the students who take the most AP courses also have an advantage. If there’s an issue to examine here, it’s the weighted grading system and how it treats AP, college, honors and general courses. Students should be encouraged to excel and to tackle challenges, but something has gone awry when students care more about grades than what they are learning.

… No more valedictorian? Principals, school board debate class rank My vote would be to make the community college courses... read more