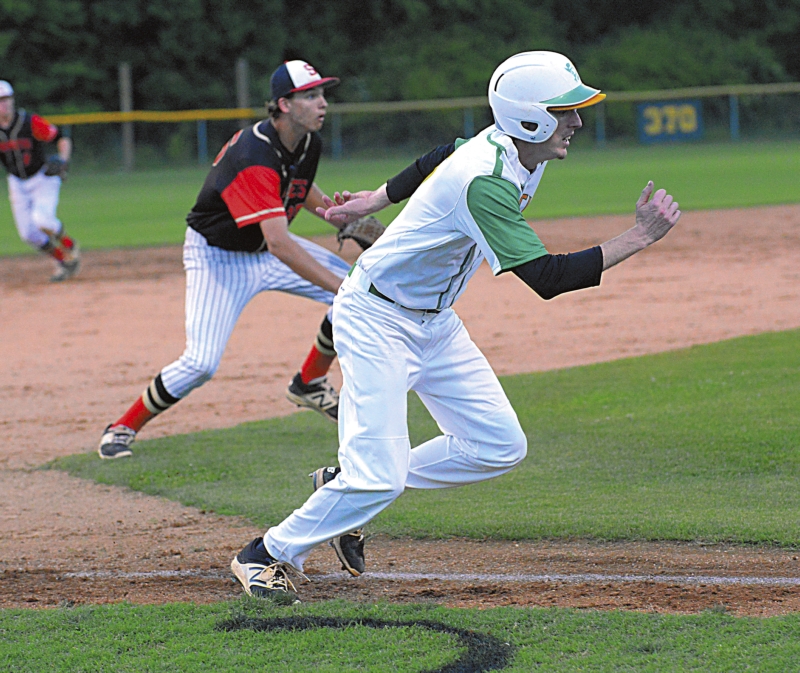 The Cavaliers had the perfect response to Thursday’s hard-to-swallow loss at Salisbury — rallying for 10 second-inning runs and coasting to an abbreviated 14-4 victory over the visiting Hornets.

“The loss (on Thursday) took a toll on us all,” infielder Corbin Smith said after North (9-12, 4-5 CCC) scored 12 unearned runs and avenged the previous night’s 3-2 setback. “We didn’t want to give them a chance tonight.”

The Senior Night triumph secured fourth place and a home game in next week’s conference tournament opener — and cost Salisbury (12-10, 6-4) a shot at the league’s No. 2 seed. The Hornets had previously won a tiebreaker coin flip with East Davidson, but the loss relegated them to third place and a home game on Tuesday.

“We had to get some help from West Davidson,” said coach Mike Herndon. “But we had a chance. You can’t blame our pitcher. He did everything he was supposed to.”

“You’ve got to field, catch, throw and hit,” said Salisbury catcher Bo Rusher. “If you can’t do any one of those four, it’s going to hurt you.”

Steinman, a junior right-hander, allowed all 10 of North’s second-inning runs. Nine were unearned. The last three crossed when winning pitcher Mark Parra laced a bases-clearing triple to left-center field with two away.

“After we lost I said, ‘We’ll know what kind of men you are tomorrow,'” he explained. “How were they going to come out tonight? We didn’t know, but they answered that question.”

Parra was more of a laborer than a craftsman. He yielded a run in the top of the first inning when Blaine Shellhorn reached on a wild pitch after striking out and Rusher lined a two-out double.

North responded by sending 14 batters to plate in its merry-go-round second inning. Javine Goodine, Kobe Dupree and Brett Tucker opened with base hits before Parra, Henderson Lentz and Steven Thurston reached on misplayed grounders. Smith — who went 3-for-4 without hitting a ball out of the infield — knocked in a run that made it 3-1 before Salisbury’s wheels unspooled and fell off.

“That inning just kept on going,” said Smith, one of six NR seniors recognized before the game. “Every time I looked up it was still bases loaded and we were still scoring.”

“We hit them in the right spots,” added Small. “They booted a couple, but then we got a slow roller here and another one there. Then Mark comes up with the shot. He squared that one up about as well as he has all year.”

Herndon spent most of the inning rubbing his eyes.

“I couldn’t believe it,” he said. “We made the pitches we wanted to. We got the ground balls we wanted, but we couldn’t catch them. To be honest, we were happy when they finally hit a ball in the outfield, but that one scored three.”

Salisbury chipped away at its deficit with two runs in the third and another in the fourth. North wrapped the match up early with four runs — three of them unearned — against Salisbury reliever Jack Fisher in the last of the fifth. One run scored on Smith’s bunt single to the right side, another on Joe Harrison’s single to center, a third on pinch-hitter McGuire Smith’s line drive up the middle and the game-winner on Dupree’s sacrifice fly.

Afterward, North players celebrated like it was New Year’s Eve.

“This win clears our heads,” Smith said. “It was a great Senior Night and gets us back on track.”

NOTES: The Cavs close their CCC regular season Monday with a makeup game at Thomasville. The tournament semifinals and championship game are scheduled Thursday and Friday at Finch Field in Thomasville. … North finished with 14 hits, including six in the second inning and four in the fifth. Rusher, a lefty-swinging sophomore, went 2-for-3 with two RBIs for Salisbury.