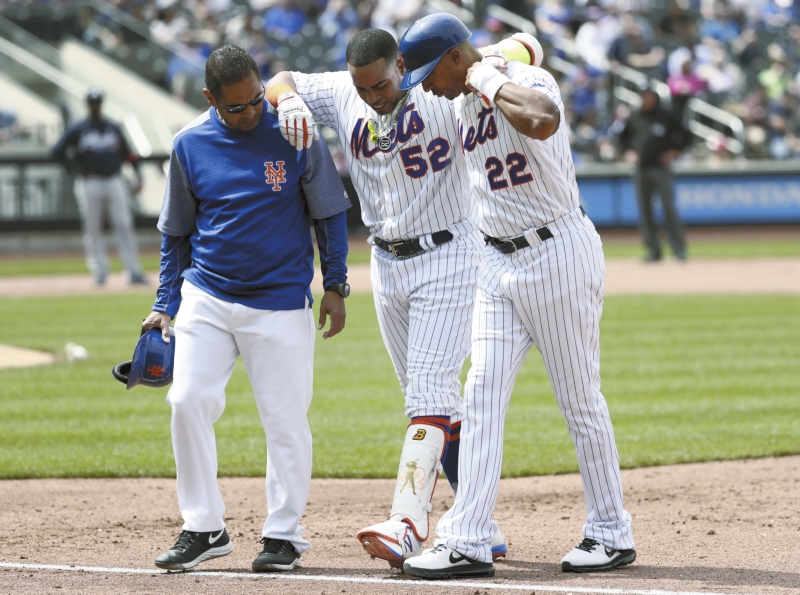 ADDS THE NAME OF THE TRAINER - New York Mets' Yoenis Cespedes (52) is helped off the field by first base coach Tom Goodwin (22) and head athletic trainer Ray Ramirez during the fourth inning of a baseball game against the Atlanta Braves, Thursday, April 27, 2017, in New York. (AP Photo/Frank Franklin II)

NEW YORK (AP) — Yoenis Cespedes reached down and golfed a knuckleball on a bounce against the right-center field wall, then while running at third-quarters speed started hopping toward second. He bent over when he reached the base and put hands on both knees.

In a series of setbacks for the New York Mets on Thursday, they scratched Noah Syndergaard because of biceps and shoulder discomfort, lost their top slugger to a strained hamstring that will send him to the disabled list, then watched substitute starter Matt Harvey get whacked.

Their 7-5 defeat to Atlanta was their sixth straight loss and 10th in 11 games, dropping them into last in the NL East at 8-13, 7½ games behind division-leading Washington. With the Mets on their longest skid since June 2015, manager Terry Collins felt compelled to give his first postgame speech to the team this year.

“We can no longer sit back and say, ‘Hey, look, you know what: It’s ugly weather. We got some guys hurt.’ No one cares,” Collins said. “They’ve got to care. They’ve got to come out, play with some energy and get this thing going, and I truly believe we can do it.”

Harvey, not expecting to pitch against the Braves, had worked out hard with weights on Wednesday and seemed to short out like a 220-volt appliance plugged into a 110-volt outlet.

Harvey walked three in an inning for the first time in his big league career in the second, when Jace Peterson singled in a run and R.A. Dickey (2-2) hit a run-scoring grounder.

New York tied the score 2-2 in the fourth on Neil Walker’s RBI double and Kurt Suzuki’s run-scoring passed ball, but Atlanta needed just two pitches to take a 3-2 lead in the fifth. Adonis Garcia singled leading off and scored on Freddie Freeman’s double. His velocity down, Harvey intentionally walked Nick Markakis to pitch to Suzuki, who hit a slider for his first home run this season, a three-run drive.

Harvey allowed six runs and five hits in 4 1/3 innings, tying a career high with five walks. He had made a surprise start against Washington last week when deGrom was scratched with a stiff neck.

“It’s happened before once. I have to be ready for it to happen again,” Harvey said.

Jose Reyes homered off Dickey in the fourth, his first of the season in his 71st at-bat, and had an RBI single in a two-run ninth that raised his average from .114 to .137.

“We don’t have no energy out there,” Reyes said. “We feel down 2-0, 1-0, we feel like we already lost. As a baseball player, when you have that attitude, that’s bad. Hopefully, we can change that.”

DeGrom (0-1) is slated to start Friday’s series opener at Washington in his first appearance since losing to the Nationals on April 22.

Raiders stay in race with win at East Rowan