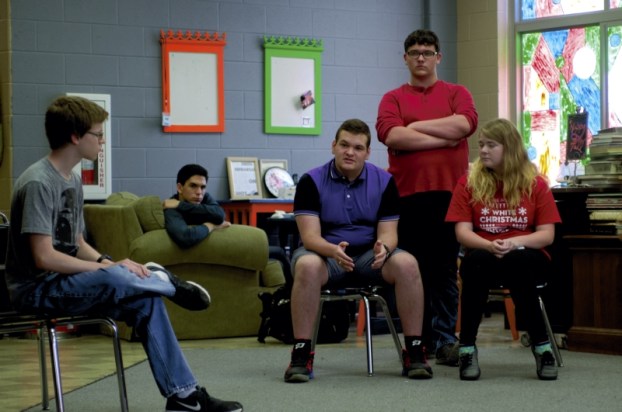 From left, Ethan Rhoades, Davis Richard, Dallas Cobb and Jadean Starcher act out a scene as Mario Cuellar, back, watches at Jesse C. Carson High School during a rehearsal of 'The Butler Did It.' Kristi Craven/Salisbury Post Usually, drama teacher Alex Reynolds said, the school does a series of short plays around Christmas and puts on a spring musical.

“But since we did ‘White Christmas,’ we switched them around,” Reynolds said.

In May, theater students will put on a series of three shorter plays on three consecutive nights.

The spring production will bring an air of mystery and suspense with two murder tales and one high-stakes drama.

“They do have very different twists, so neither night is going to feel like the other one,” Reynolds said of the murder mysteries.

Students will perform “The Butler Did It,” “The Game’s Afoot” and “Twelve Angry Men.” The class changed the latter’s title to “Twelve Angry Jurors” because the cast features several women.

“They have the same atmosphere,” Reynolds said, “but they all have very different stories.

There’s something else unique about the performances. All three plays will use the same set. At the end of each play, actors will strip the room of all but a fireplace and a built-in bookshelf in preparation for the next day’s play. Ethan Rhoades, left, gestures to a chair in front of Alyssa Ward, as he delivers his line at Jesse C. Carson High School during a rehearsal of ‘The Butler Did It.’ Kristi Craven/Salisbury Post

Reynolds said it’s the first time the school has created a set to be used for more than one play in the same week. One challenge has been making sure that the mobile parts of each set are distinct enough to differentiate among the plays.

“So this is a totally new thing,” he said.

The audience will be up close and personal for the plays. Seating is in tiered rows on either side of the set, so that the actors are “boxed in.”

“So we’ll literally let the audience walk across the set,” Reynolds said.

It creates an intimate atmosphere between the audience and the actors, he said. While Carson has let the audience sit on stage before, this set-up is still a little new.

Having three shorter plays allows more students to have speaking parts. Reynolds estimates that about 32 students will have speaking roles among all the plays.

“Which is awesome,” Reynolds said.

There are about 90 seats available per show. Anyone interested in attending is encouraged to call and check for ticket availability. Tickets must be purchased in advance. Contact the school at 704-855-7297 for more information.