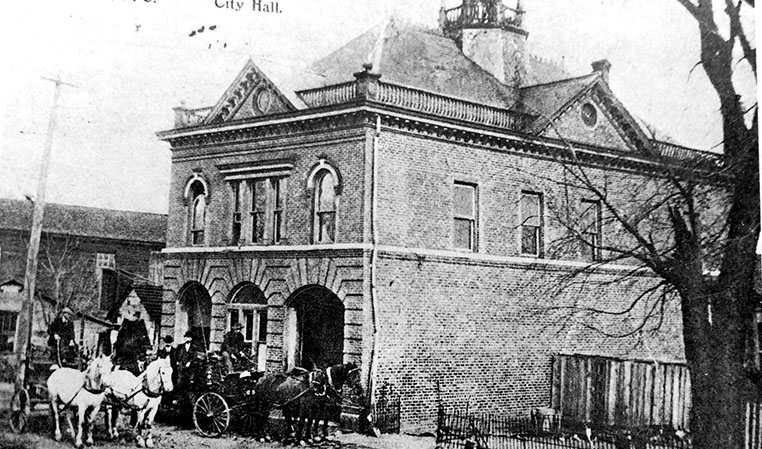 This building was used as one of the first Salisbury fire stations, police station and city hall. The building called the Firehouse stills sits on South Lee Street beside Salty Caper pizza. Salisbury Post file photo

SALISBURY — In the simplest terms, firefighting comes down to people risking their lives to save other people. It’s true today for the Salisbury Fire Department just as it was 200 years ago when it was formed.

The Salisbury Fire Department has been celebrating and will continue to celebrate its 200th anniversary with more events scheduled throughout the rest of the year.

“We consider ourselves very honored and privileged to be here in this year,” he said.

The fire department’s rich history and heritage evoke images of days gone by of bucket brigades and hand-pump fire trucks. It all started with the work of 32 Salisbury citizens who purchased the first pieces of equipment that would that year launch the department.

A document dated Dec. 8, 1817, lists the 32 residents who paid $415 for equipment. It’s the earliest document of record found for the Salisbury Fire Department. It became its adopted charter and was the birth of the fire department.

Notably, the year 1817 is 44 years after the Boston Tea Party — and 44 years before the start of the Civil War.

“We don’t know what equipment they bought,” Parnell said of those early days.

What has been learned in research is that at the time of its founding, the Salisbury Fire Department wasn’t named as it is today; it was called the Salisbury Vigilant Fire Company.

Research took the fire department “historians” to the Sanborn map collection, which is a series of large-scale maps, dating from 1867 to the present. The maps depict commercial, industrial and residential sections of some 12,000 cities and towns in the U.S., Mexico and Canada.

The Sanborn Maps were originally created for assessing fire insurance liability in urbanized areas in the United States.

It gave the fire department a look at the agency pre-1900, Parnell said.

The fire department researchers worked with the Historic Salisbury Foundation where they discovered the first official fire station was located on East Innes Street in what is now a parking lot beside K-Dee’s Jewelry in downtown. Prior to the first established station there was a station that operated out of a private garage, but the location was never determined through research, Parnell explained.

The building that housed the second station is still in existence today, known as the Old Salisbury Firehouse building, and stands at its original location, 113 E. Lee St., located beside Salty Caper Wood Fired Pizza. The firehouse building, erected around 1897, also held the mayor’s office and a jail.

Parnell said he’s heard stories passed down from the older firefighters who recalled the jail and fire station being in use at the same time. Some firefighters had to watch prisoners, as the story goes.

The fire department was housed on the first floor, the city jail in a one-story back section, and office space was on the second floor. It operated as a fire station until the early 1960s.

The early fire department used buckets to haul water, while horses pulled its carts and wagons. The first steam pumper was purchased for $5,500 in 1908, and four years later, the department obtained its first motorized vehicle, a hose wagon.

A later model ladder truck from 1941 is currently being restored by fire personnel and is expected to be unveiled in the latter part of the year.

The year 1942 also saw construction of the fire station next to Chestnut Hill Cemetery, which borders South Fulton, Johnson and South Main streets. Known as Station No. 2 back in its heyday, the facility is still in operation today as Station No. 5.

On Feb. 22, 1980, the station was closed and later was used as storage for various city departments before being returned to firefighting use more than three decades later.

One of the longest serving firefighters on record was A.P. Hartline, who served over 50 years. He began with the Salisbury Fire Department prior to the 1900s and retired in the 1950s.

“His family recognized his contributions and gave some of his artifacts to the Rowan Museum,” Parnell said.

Alexander Parker served as the first fire chief, according to the first log books found, which have the year 1892 inscribed on the first page.

“We have lots of written history,” Parnell said.

“I enjoy the history of the fire department and Salisbury in general,” he said.

The earliest way to get water, before cast iron piping of the late 1800s and hydrants, was through wooden water pipes.

About five years ago, the city was working on piping on East Fisher Street when workers unearthed a piece of 19th century wooden water pipe. The wooden water mains were first installed in Salisbury in the 1860s.

When a fire occurred, the firefighters would dig into the ground, find the “log” and make a hole. The water from the wooden pipe would fill the hole and form a “wet well” to either get water into buckets or serve as a reservoir for pumping water. When the fire was out and firefighters were done they would plug the hole. This practice is where the term fire plug came from and is another name for a hydrant.

Firefighters used hand pumps for a fire at the Square and hauled water using a water wagon, which was pulled by a horse. Water would’ve been pumped at the Depot and a water wagon would have been filled and taken back up the hill to fight a fire. According to information found during the fire department’s research, when General George Stoneman and his Federal troops rampaged through Salisbury, a fire pumper was burned, much to the delight of firefighters at that time who had to hand pump the water.

Today, there are five Salisbury stations. Station No. 1, located at 514 E. Innes St., was dedicated in 1965 and protects the heavily-populated downtown district and the eastern section of the city. The station is also home to the Fire Administration and Training Division.

Station No. 2, located at 2313 S. Main St., was constructed in 1980 and serves the southwest section of the city. The station protects a mixture of residential property, numerous industries and businesses, and includes Rowan-Cabarrus Community College, Salisbury High School and Rowan Regional Airport.

Station No. 3, located at 1604 W. Innes St., was constructed in 1956 and protects the northwest section of the city. This area is primarily residential, but there are several public facilities with high concentrations of commercial and educational facilities such as Catawba College, Livingstone College, Novant Health Rowan Medical Center and the W.G. Bill Hefner VA Medical Center.

Station No. 4, located at 2325 Statesville Blvd., is the newest station and was constructed in 2005. The station protects a mixture of residential and commercial businesses. Several target areas include the West End Plaza, Salisbury Gardens Retirement Home, and Food Lion Headquarters.

Station No. 5, at 1402 S. Main St., is the oldest station, originally built in 1942. After serving for 38 years, the station was closed. The old fire station sat idle for several years. The city’s purchasing department renovated the building and remained there for many years. The City of Salisbury Landscape Department also used the site, followed by the city’s Parks and Recreation Department. In 2014, the fire department reclaimed the station and began to renovate/restore the building back to a fire station.

Plans are in place to replace Station No. 3 at its current location on West Innes Street with a new station on Mahaley Avenue, next to Salisbury Family Dentistry. The current station, built in 1957, has a number of structural problems.

The new station is planned to include three truck bays, administrative, and other support areas at a cost of nearly $4 million.

The move would also allow for a larger coverage area. Station No. 3 currently overlaps its coverage with other fire stations.

The city also has plans to build a new station, Station No. 6, at just over 19,000 square feet, that will include residential and administrative areas, a training tower and five truck bays at the cost of just over $4 million.

The planned location for Station No. 6 is Cedar Springs Road, near U.S. 29 and Airport Road.

The fire department will be adding other anniversary activities throughout the year.