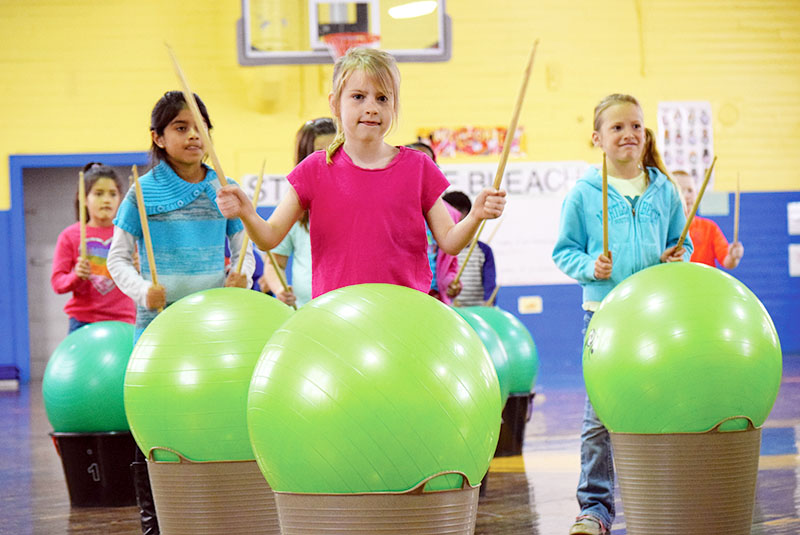 WOODLEAF — It’s hard not to move to the beat. The music blaring from a speaker in Woodleaf Elementary’s gym is all high-energy — “Witch Doctor,” “Wipeout,” “Ghostbusters,” “Beat it” and “What Does the Fox Say?”

But there’s another sound in the gym: the sound of drums. Second graders wield drumsticks, clacking them together above their heads and bringing them down with force on individual “drums” as they work their way through song after song.

The performance is part of a new physical education unit called “Drums Alive.” And it’s unlike any other unit the school system has run before. Because this one is a collaboration between music class and P.E.

When a school has the drums — bright green exercise balls balanced in a bucket — students get a chance to play twice a week, once during their P.E. time, and once during their music time. Operating on a “two brains are better than one” principal, the class is co-taught by music and P.E. teachers who guide the students through movement, rhythm and routines.

Kelly Feimster, director of instructional programs, said that research has shown that combining music or art and physical activity helps stimulate the brain and sparks creativity.

“You’re using all areas of the brain when you combine music and physical activity,” she said.

And it adds an extra “fun factor” to both classes that helps capture students’ attention. The Drums Alive unit helps students learn how to follow directions, improves coordination and can even help them with fluency and literacy later in life.

Feimster said she learned about Drums Alive when she saw a video of it on Facebook. The idea immediately captivated her.
“So we started investigating to see if it was a possibility,” she said.

The school system purchased three to four sets of 25 “drums” and drumsticks to be shared between the district’s 20 elementary schools. Schools sign up for the unit, getting the equipment for several weeks, before it’s passed on to the next school.

And they can accomplish a lot during that time. Some of the classes at Woodleaf are learning routines, and will put on a performance for parents and family members at the end of the unit, music teacher Molly Trexler said.

Trexler said students are “very much engaged” in the unit — twice a week they’re happy to take wood to rubber, make noise and dance around.

“Honestly it’s something different for our kids to do,” she said, “… It’s something new and exciting that they can get into.”

When they walk into the gym and see the drums, students’ faces light up

It also introduces them to the concept of integrated subjects — something that they’ll need later in life. And for Trexler and co-teacher, P.E. instructor Tammy Daugherty, it’s a workout. The two run six classes a day, twice a week. And while a Drums Alive session captivates kids easily, Trexler said, the two work to keep their own energy high.

But co-teaching makes it easy to split responsibilities. Trexler guides the students through each song— telling them where to strike the drum and walking them through repetitions — while Daugherty helps them move, signaling them to crouch on the floor, circle around their drum or weave around the gym during a slow measure.

Students at Woodleaf are enjoying the unit so much, in fact, that Trexler and Daugherty are raising funds to get the school its own set of drums.

“We’re used to sharing but it would be really nice to have something,” Trexler said.

Feimster said the district is also looking to expand its sets.

“The sky’s the limitation on this,” she said.