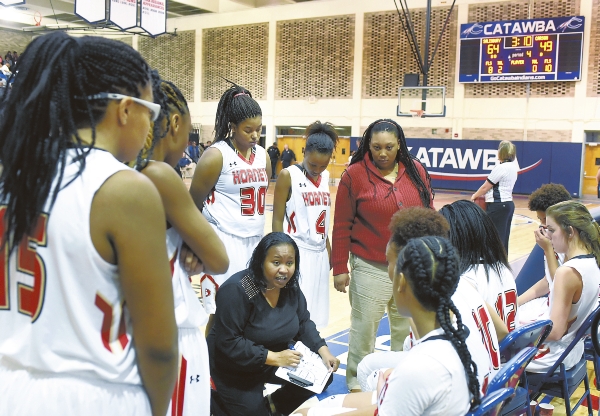 SALISBURY — Lakai Brice and Salisbury girls basketball. It was hard to say one without the other this past winter.

The fourth-year coach and her custom-built team coupled like a wink and a smile, enjoying a magic carpet ride of a season that stretched into the second round of the 2A state playoffs.

“We all had a great year,” said Brice, who was rewarded with the Rowan County Coach of the Year award. “I think the girls shocked themselves. They never got caught up in the numbers, whether we were 10-1 or 12-1. Even when we learned we were ranked third in the state, it didn’t go to our heads. We just played on.”

Salisbury went 21-3 overall and ran the table in the Central Carolina Conference (10-0), before falling in the conference championship game. The Hornets split a pair of post-season matches and ended their run with an unexpected, 58-46 loss to Madison on Feb. 23.

Along the way Salisbury captured the Christmas tournament, enjoyed a 20-game winning streak and had four scorers boast double-digit averages.

“Wow!” said Brice, a New Jersey native and former four-year starter at Catawba. “Four years ago, I wouldn’t have thought I’d be standing here as Coach of the Year. I knew we had some players coming in. I knew we’d get back to winning eventually. I just didn’t know how fast.”

“I know it sounds crazy,” she said. “But after that first loss I went into the locker room and I knew, right then, this was going to be a special group. They were crying. They took that loss very hard. They felt they could be so much better. I knew that moment was either going to make us or break us — and it made us great.”

A day later the Hornets won by 55 and the journey was underway. Brice continued to do her homework, leaning on local coaching legends Andrew Mitchell, Mike Gurley and Joe Nixon for sagacious advice.

“Coach Mitchell said you have to have great assistants,” Brice noted. “He said to surround yourself with good people who believe in you and your philosophy. I took that step and added Coach (Robert) Hairston to my bench.”

Brice approached Gurley with a specific request. “I wanted to see how he coached his defenses,” she explained. “This year we switched from a lot of 2-3 to a lot of full-court man-to-man. He helped with that, saying with the athletes I had, we should be able to get out in transition and run all day.”

She spoke with Nixon, West Rowan football coach and fellow Catawba alum, about winning and how to keep a program on top.

“I went to several practices around here, trying to find out what I needed to do,” she said. “I wanted to see if they did something I wasn’t doing. I wanted to be a better coach.”

Brice’s ever-evolving mindset paid off handsomely. “I’m a dedicated coach and still a student of the game,” she said. “I don’t know everything, but talking to other people and being willing to learn really helped me and my girls this year.”

What would her girls say about that?

“That they have one of the most passionate and determined coaches around,” Brice replied. “Someone who really cares about her players. That’s what they’d say.”

They would — with a wink and a smile.