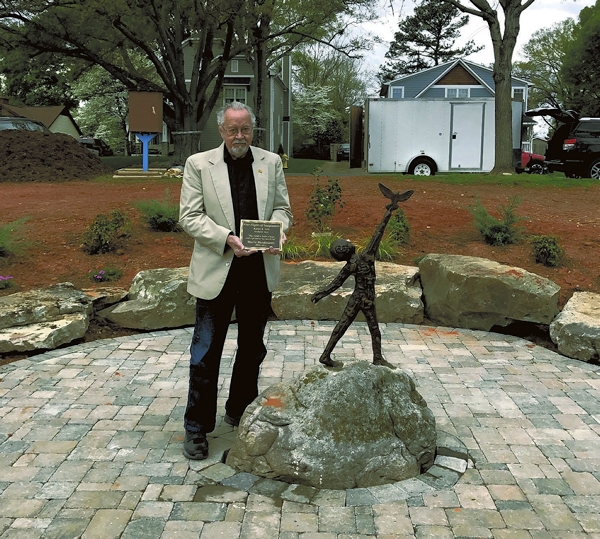 Salisbury sculptor Robert Toth poses with his 'Free Flights of Imagination' bronze, which was installed Friday in the new Peace Garden at the Park Road Montessori School in Charlotte. The Peace Garden will be officially dedicated April 28. Submitted photo

“Free Flights of Imagination,” a sculpture by Salisbury artist Robert Toth, will be the centerpiece of a new Peace Garden at the Park Road Montessori School in Charlotte.

Celebrating 25 years of public school access to Montessori education in the Charlotte-Mecklenburg Schools, the Peace Garden will be dedicated April 28 with Toth in attendance.

Toth’s 3-foot-high statue was actually installed Friday. The school is at 3701 Haven Drive in Charlotte.

Toth describes his sculpture, which was cast in bronze by Carolina Bronze of Seagrove, as a free-form abstract boy reaching for a symbolic dove of peace.

“The child is both a hope and a promise for mankind,” Toth said.

The boy’s figure holds a collage of  fragments of toys, puzzle pieces and other things that form “a time capsule of our time for future generations,” Toth said.

The sculpture being placed at the Montessori school has special meaning for Toth, who battled dyslexia and an attention-deficit disorder as a child growing up in Newark, New Jersey.

“A teacher’s hands-on demonstration of a subject can inspire others to do things with results,” Toth said in a statement from the school.

“I can testify to this from my early-childhood learning disabilities, which were turned around by my mother and her knowledge of the Montessori principles, which provided me with the tools for drawing, painting, clay/sculpture, watercolors, etc.”

Toth says his mother, Caroline, encouraged him from an early age to follow his creative instincts and he continually worked with paints and clay. He otherwise struggled in school and says he repeated the fourth grade at least three times.

Toth has created a collection of more than 30 cast bronze busts of people he describes as larger than life. Maria Montessori, a 19th-century Italian physician and educator, was one of his early subjects.

“The whole point is,” Toth said in a recent interview for GreatSchools, a national nonprofit group for parents and education, “in the educational system, we have to look at kids in a new way and say, ‘Hey, they have different learning styles — they’re visual people, maybe, or they have scientific brains.’

“Some of them excel in sports, some of them in art, like me, some in math. I failed math; Einstein passed it. But he couldn’t paint and sculpt like me. So we all have these specialties, these strengths.”

Toth specializes in bronze, and he has had works commissioned for Lincoln Center in New York, the National Gallery in Washington and the Vatican.