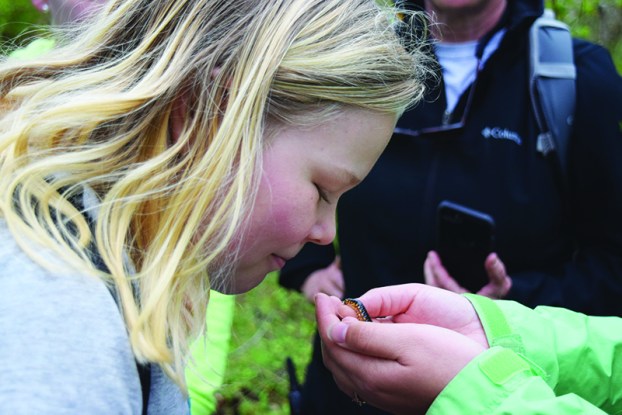 Savannah Goodwin, a student at China Grove Elementary, leans down to sniff a millipede. Students discovered the arthropod on a trail at Boone's Cave Park, and paused to learn more about it. Muddy Sneakers staff leading the hike told students that this species of millipede releases a cherry-like scent when agitated, and passed it around for the class to take a whiff. Rebecca Rider/Salisbury Post

— Barbara Knight, a naturalist with Muddy Sneakers, a nonprofit group dedicated to teaching youth about nature, who was explaining to a group of China Grove Elementary School students the importance of respecting animals in their habitat

• “It’s my revenge on the cellphone users. My point is, technology is good, but you have to restrain its use. You don’t have to use it every day.”

— Charles Pilkey, a sculptor whose work ‘A Question of Balance’ — part of the Salisbury Sculpture Show — depicts seven figures seemingly preoccupied by their cellphones

• “In order to understand the problems, we have to be part of  the solution.”

— Chris McNeil, deputy principal at Knox Middle School, who was among the  educators, community leaders, law officers, clergy and others participating in the first of four  Community Action Planning Sessions to discuss issues including violence,
dropouts and unemployment

• “There will be a lot of highs and lows in this game. That’s why you can’t make too much of anything.”

— Tim Tebow, the former quarterback who hit a home run in his first at-bat as a New York Mets minor leaguer Thursday, then struck out his next three times up

• “I see greatness confined and overshadowed by the lack of opportunity.”

— Phillip Bush, a former North Rowan High School track star who hopes his recently released album, ‘The Black Elephant,’ will bring about change for his hometown of Salisbury

• “Change happens, so you better get ready for it.”

— Beverly Perdue, the former N.C.  governor who was among education leaders and advocates from five states to tour Rowan County schools Thursday and Friday to learn about technology initiatives and other programs

Letter to the editor: ACC, NCAA are out for control, not fairness

From IRS.gov: “To be tax-exempt under section 501(c)(3) of the Internal Revenue Code, an organization must be organized and operated... read more