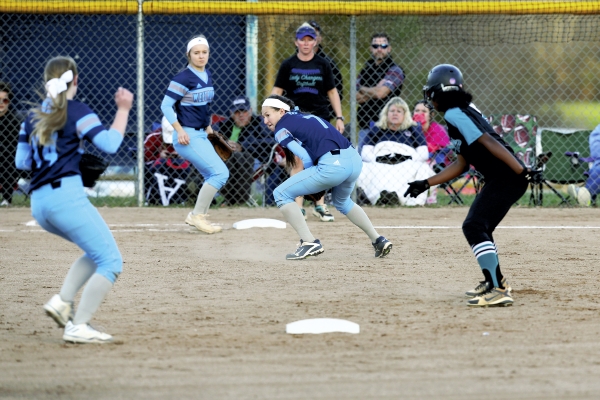 “How many bruises on my stud third baseman?” West coach Jimmy Greene asked.

Nooner was able to chuckle because West Rowan’s softball team held off Central Cabarrus, 7-4, on Friday, finishing a season sweep of the hard-hitting Vikings. Nooner was a big part of it, making all kind of plays at third base. Mary Sobataka made sensational stops at shortstop. Right fielder Khara Fesperman made a diving catch to end the sixth when things were starting to get scary. First baseman Morgan Corriher did some serious digging and scooping.

The 1-6-3 double play that West starting pitcher Hannah Roberts, Sobataka and Corriher turned to wipe out a leadoff walk in the fourth had to be seen to be believed. Sobataka looked like Derek Jeter coming across the bag.

“We won this one with our defense,” Greene said.

Central (10-5, 9-4) made harder and more consistent contact than the Falcons (9-3, 9-3) did. The two balls that the Falcons really smoked — long drives into the wind by Sobataka and Ava Link — were just loud outs.

West gave Roberts a 1-0 lead in the first inning on two funky swings. Parker Greene reached on a roller that actually went off her foot, but the umpires didn’t detect it. Greene scored from second when Sobataka rapped a spinning knuckleball to the right side that couldn’t be handled cleanly.

Roberts helped herself with a sac fly that scored Corriher for a 2-0 lead in the fourth, and Roberts was able to cling to that lead through the top of the fifth with  a lot of help from Nooner and her friends.

“I was just trying to keep the ball outside as far as I could,” Roberts said. “They were hitting it, hitting it hard sometimes, but I couldn’t be prouder of the way we played defense.”

In the bottom of the fifth, West took a 5-0 lead with a little-ball clinic.

Linder got on base to start the rally. Link beat out a roller. Everyone knew Greene’s sacrifice bunt was coming, but it still triggered chaos. When the Vikings threw it around, it was 3-0. Sobataka whacked a bouncer, but Link can run, and she slid home ahead of the throw for 4-0. Then Greene came bounding home on a wild pitch, and it was 5-0.

“Our offense was hit and miss,” Roberts said. “But we did get big bunts down.”

Central finally broke through against Roberts in the sixth. Two hard-hit singles started the inning. Carson Matheson ripped a pitch that was high and away to right field for a two-run single, and the Vikings were back in the game. Fesperman’s diving catch couldn’t have been more timely and got Roberts out of the inning.

“This is a rivalry game, we beat them 10-0 down there and we knew Central  was going to be ready and fired up to play today,” Coach Greene said. “They can hit. We couldn’t have asked for more than we got from Hannah Roberts. She was hitting spots and she had her changeup working.”

A solid one-out hit by Fesperman and a double sliced to right by Linder put West in business in the bottom of the sixth.

“Their pitcher (Riley Tucker) was working us outside, and we knew our right-handed batters were going to have to go to right field to get hits,” Linder said. “But that’s the strong suit for a lot of us.”

Both runners scored when Greene slapped a two-out grounder to short. She hustled down the line,  putting pressure on, and when the throw skipped away, the Falcons led, 7-2.

Roberts finally  ran out of gas in the seventh. She hit the first batter, and then Elaina Bost cranked a two-run homer to left.

“I knew that was gone as soon as she swung,” Roberts said. “Have to give her that one.”

Sobataka stabbed a wicked liner an inch off the ground for the first out. When Tucker punched a single through the right side, Greene went to the bullpen — tall freshman Tori Hester.

“They were getting their timing on Hannah,” Coach Greene said. “Tori was throwing it from a different height and with a different spin.”

Nooner gloved a groundball that was practically spitting flames, and Corriher somehow made the scoop out of the dirt for the second out.

Then center fielder Hannah Pratt  snagged a routine fly to end it.

“We played great as a team, and that’s what it took to beat Central Cabarrus,” Coach Greene said. “We’re really young, but we played a mature game.”