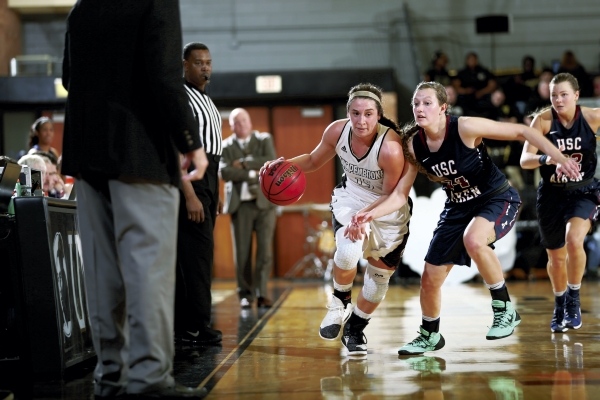 UNCP photo ... Guard Avery Locklear, left, drives past two USC Aiken players during a game this past season. Locklear is a former star at South Rowan High School, and was the Rowan County Player of the Year in 2014 and 2015.

She finds Colonial America a fascinating time period. She can recite important events, facts and influential people during the days of the first colonies.

“I find it to be an interesting period in our history,” Locklear said. “The problems they encountered and the different groups fighting for land.”

The 1960s is a close second on Locklear’s preferred time periods in American history. Her grades at The University of North Carolina at Pembroke are a good indication that this Landis native has a pretty good grip on the past.

The sophomore history major has an impressive 4.0 cumulative GPA. She also has skills on the court as a guard on the women’s basketball team.

Recently, Locklear made her own history becoming the first UNCP women’s basketball player to earn the Peach Belt Conference Elite 15 Award. Locklear’s 4.0 GPA was the highest among the more than 100 student-athletes who participated in the 2017 Peach Belt Tournament.

“I value my education,” Locklear said. “I really want to do well on the court and in the classroom. Winning this award shows that athletes are focused not only on their sport but their education, as well.”

Juggling a full course load, practice, road trips and off season workouts can be challenge. Juggling, it seems, comes easy for this 19 year old.

She volunteers with youth at the Pembroke Housing Authority. She is a Student Athlete Advisory Committee (SAC) representative for women’s basketball and a member of Phi Alpha Theta, a National History Honor Society. She serves as vice president of Kappa Delta sorority.

When freshmen arrive on campus, Locklear is among the student orientation leaders leading them on campus tours.

“You have to manage your time and prioritize,” she said. “It can be difficult, but you have to put your mind to it.”

Charlene said her daughter has always been very driven and determined in the classroom and on the court.

“She is very hard on herself,” she said. “We have always supported her playing basketball, but my rule was as long as you continue to keep your grades up, you can play.”

“We were really excited when she learned she won this award,” Charlene continued. Being the first women’s basketball player to receive the Elite 15 award is a testament to the athletic programs at UNC Pembroke.”

“Coach (John) Haskins and Coach (Kapica) Davis emphasize getting good grades,” Avery said. “This award shows how much emphasis they place on academics.”

Avery is the epitome of the student athlete, according to head men’s coach John Haskins.

“She is an outstanding player who works extremely hard, never complains or makes excuses, and represents our program in a first class manner,” Haskins said.

classroom as she does on the basketball court. We are fortunate to have Avery in our program and she is a pleasure to coach.”

Athletic director Dick Christy was on hand as Locklear was honored during the PBC Championship Banquet in Greenwood, S.C., on March 3.

“We are so proud of Avery’s academic achievements and how she embodies the best definition of what it means to be a student-athlete,” Christy said.

This distinction brings pride to the university and the region.

“I was really happy to be there and be a part of the celebration,” Christy added.

The love of history and sports runs deep in the Locklear household. Avery’s older sister, Sara, and their dad, Rick, both hold degrees in history. Rick, a Pembroke native, played football for Catawba College.

At one time, she held the state record in the 100-yard hurdles.

Avery’s uncle, Kelvin Sampson, is also a UNCP Hall Famer and standout athlete for the Braves in the 1970s. Sampson is the head men’s basketball coach at Houston University.

Locklear Hall, which houses the art department on campus, is named for Avery’s great-grandfather, Anderson Locklear.

Avery, a four-sport athlete at South Rowan High, is no stranger to academic accolades. She was her high school salutatorian and was named to the Peach Belt Women’s Basketball All-Academic Team at UNCP. She is on track to graduate in three years.

Locklear has plans to apply to grad school, then pursue a law degree. She is torn between a career in teaching or becoming an attorney, like her father.

“As parents, we are extremely proud,” Rick Locklear said. “Avery has always worked extremely hard. She always talks about allocating her time and how she spends her day with regard to the dedication she puts in practice and her course work.

“We hope she will continue to put the classroom first.”

UNC Pembroke is a constituent institution of the University of North Carolina system.

NASCAR: Blaney’s strong start should earn him some attention