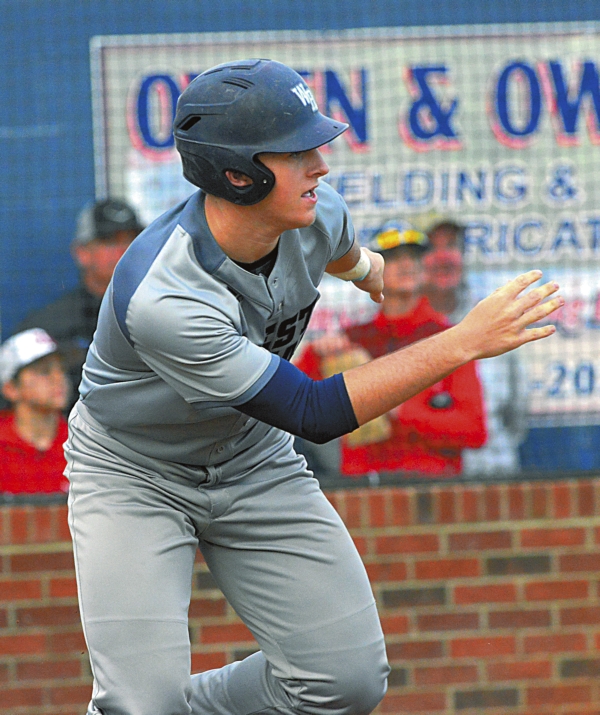 MOUNT ULLA — You don’t have to play an impeccable game to produce something wonderful.

West Rowan’s baseball team illustrated as much on Wednesday, when it squirmed to its sixth consecutive victory — an 8-5 South Piedmont Conference decision over visiting Robinson.

“It wasn’t our best game, but we still found a way to get it done,” coach Seth Graham said after the Falcons (9-3, 7-3) remained tied for second place in the congested league standings. “There’s something to be said for that. You’re not going to be good all the time, but you still have to grind it out.”

West had to hang on for this one. It built a five-run lead after two innings and sat on an 8-1 cushion, entering the top of the seventh. Robinson (6-5, 6-4) rallied for four runs — two of them unearned — to make it a closer game.

“This was more a test for us than anything,” winning pitcher Austin Love said after procuring his third victory. “We had won five in a row, but this brought us back down a notch.”

The Falcons played raggedy defense, committing a season-high four errors. Robinson had five miscues, including one in each of the first two innings. That tainted a decent start by junior right-hander Jason White, who yielded seven unearned runs in a 5 2/3 innings.

“Our biggest problem,” said losing coach Ryan Hodges, “is we give away too many runs, too many outs and make our pitchers throw too many pitches. You take away all the unearned runs and instead of an 8-5 game, this might have been 5-1 or 5-2 for us.”

Love also struggled to look good. He worked his way into and out of trouble for 5 1/3 innings, finishing with eight strikeouts, three walks, two wild pitches and a hit batsman.

“Historically, Austin has an off-night once in a while,” Graham noted. “He still went out there and competed.”

Hey, even Sinatra had to clear his throat now and then. Love allowed only three hits and an earned run in a 98-pitch effort. He was spelled by right-hander Brett Graham — the coach’s distant cousin — after Robinson’s Bryce Vanhook reached on a one-out error in the sixth.

“It’s a good thing we got on them early,” West catcher Trevor Atwood said after reaching base three times. “That may have made us relax a bit.”

West jumped ahead in the last of the first when Atwood lined a two-out, RBI-single in left field and Pearce Wilhelm followed with a blistering, run-scoring double to the gap in left-center.

An inning later it was 5-0. Timmy Wilmot’s bunt single put two runners aboard with none out and both scored when Logan Sproul’s sacrifice was misplayed into a two-run error. Another run crossed on Love’s sacrifice fly.

“We came out in good shape,” Graham said afterward. “But it kind of scared me because that’s what we did at their place (in a 3-2 loss on March 3) last time. We tried to coast and wound up getting beat.”

Not this time. West added single runs in the fourth, fifth and sixth innings — including one on Olen Stamper’s bloop single to shallow right field that provided a six-run lead in the fifth. That helped Love, who used a mid-80’s fastball and a sharp curve to retire eight of the last 10 batters he faced.

“I don’t want to say I wasn’t impressed,” said Hodges. “He’s a good pitcher. He pounded the zone and got good frames. But he probably has better stuff than he showed tonight.”

Brett Graham worked out of trouble in the top of the sixth, then struggled to seal the deal. He surrendered Noah Love’s three-run double and Joe Tolone’s run-scoring single in the seventh, when Robinson sent eight batters to the plate.

“It’s still a good win,” Atwood said. “The momentum keeps coming. That’s another game down for us.”

NOTES: Atwood and Brandon Walton each had two hits for the Falcons. Noah Love knocked in four runs for the Bulldogs. … A New York Yankees scout watched the first three innings from the stands, evaluating Austin Love — who has signed a letter-of-intent with UNC-Chapel Hill. … West returns to action this afternoon at Northwest Cabarrus. Gametime is 4:30 p.m. Robinson hosts Central Cabarrus at 4.