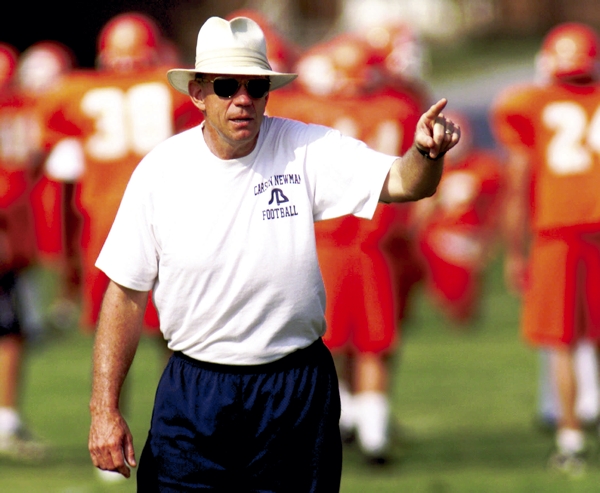 JEFFERSON CITY, Tenn. — Ken Sparks, a football coach who won 338 games for Division II Carson-Newman to rank fifth on the NCAA’s all-time list, has died. He was 73.
Carson-Newman athletic department spokesman Adam Cavalier said Sparks’ wife, Carol, informed the school that the coach had died Wednesday at their home.
Sparks spent his entire 37-year college head coaching career at Carson-Newman and went 338-99-2 before retiring in November . The only coaches with more career wins than Sparks are John Gagliardi (489), Joe Paterno (409), Eddie Robinson (408) and Bobby Bowden (377).
“It’s been an unbelievable journey,” Sparks said during his Nov. 14 retirement announcement.
Sparks announced in 2012 that he had prostate cancer but continued coaching five more seasons. Sparks said his health issues played a role in his decision to step down.
“My goal was to die on the practice field and they roll me over in the kudzu and Carol wouldn’t have to worry about funeral arrangements and all that,” Sparks said during his retirement announcement. “We’re going to see what the Lord has for us.”

Sparks and his teams had many battles with fellow South Atlantic Conference member Catawba over the years, and won most of them — 29-8 against the Indians during Sparks’ tenure.

“It’s a sad day for college football,” said Catawba coach Curtis Walker. “Coaches all across America had the utmost respect for Ken Sparks. He always had great things to say about you, your team and your work ethic. He will be greatly missed.”

Since Walker took over in 2013, Catawba is actually 3-1 against the Eagles, including a 40-20 victory in Salisbury last season, Sparks’ last. Walker was quick to downplay that success.

“I took a lot of whippings from Coach Sparks and Carson-Newman as a player and an assistant coach at Catawba, so it was great to have the success we’ve had against them,” said Walker. “But I just feel blessed that my first opportunity as a head coach came in the same league that Ken Sparks coached in. The SAC will miss him very much.”

“Coach Sparks was a great coach, obviously, but to me, he was such a great Christian mentor, leader and friend,” said Hester. “He always knew that there was a bigger picture. He made a huge impact, not only on his players, but also on other coaches — not just those on his staff but all of us.

“He’s a Hall of Famer in every sense — not just as a coach but as a man,” continued Hester, head coach at Catawba in 2002-12. “Coach Sparks’ record is crazy good. His teams were always the gold standard of the league … that’s why it was always such a big deal when you did beat Carson-Newman.”

Before Carson-Newman entered the NCAA ranks in 1993, Sparks led the Eagles to five NAIA national championships — in 1983, 1984, 1986, 1988 and 1989. Carson-Newman was an NAIA runner-up in 1987 and lost in the NCAA Division II championship game in 1996, 1998 and 1999. Carson-Newman reached the Division II semifinals in 2009.
Sparks’ teams won 21 South Atlantic Conference championships and earned 25 NCAA or NAIA playoff appearances.
He was inducted into the inaugural NCAA Division II Hall of Fame coaches class in 2010 along with Northwest Missouri State’s Mel Tjeerdsma and West Alabama’s Bobby Wallace. Sparks also is in the Tennessee Sports Hall of Fame and the NAIA Hall of Fame.
Sparks received lifetime achievement awards from the Fellowship of Christian Athletes and the All-American Football Foundation.
___
More AP college football: www.collegefootball.ap.org and https://twitter.com/AP_Top25