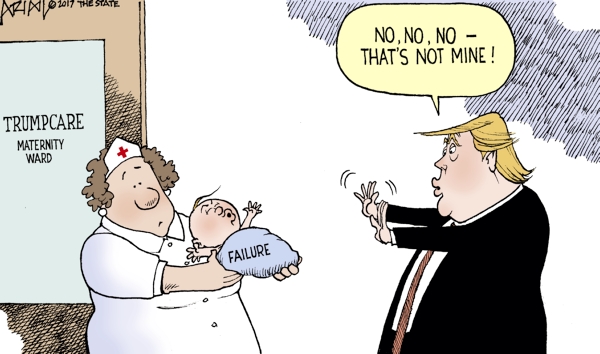 Al Hunt: Our president is a stranger to truth President Donald Trump, or associates claiming to reflect his views, have fingered a range of villains to blame for the legislative collapse last week of the Republican health-care plan. These include conservative think tanks, Democrats, House Speaker Paul Ryan, the “Freedom Caucus” of right-wing Congressmen, his son-in-law, his chief of staff Reince Priebus and the deeply flawed bill to replace Obamacare.

Naturally it didn’t occur to the chief executive that the chief culprit was himself. He failed at public persuasion — only 17 percent of voters supported the measure — and private pressure, with idle threats to campaign against opponents.

Then he lied, falsely claiming that he never said he’d repeal and replace Obamacare quickly, and distancing himself from the bill that only days earlier he had enthusiastically embraced.

Trump is a stranger to truth, civility and personal responsibility. That has been evident to Trump watchers for decades and will be the central characteristic of the rest of his presidency.

To congressional conservatives, Republican leaders, African-American politicians, global allies or adversaries and the public, his word is transactional. Trust is just another thing to negotiate. But governing doesn’t work that way.

“A president has to establish an atmosphere of trust; trust is the coin of the realm,” former Secretary of State George Shultz said on “Face the Nation” on CBS on Sunday. “It’s important for a president to get off to a start where people see he says what he means, he means what he says and he can carry out what he starts out to carry out.”

Trump can talk about changing priorities, switching strategies and crafting new coalitions, but his disdain for truth won’t change.

Other presidents have misrepresented facts, even on occasion lied. But this one is different, not only in degree but in kind. The hope of some Republicans was that the man who spread the nutty, racist charge that President Barack Obama wasn’t born in the U.S. would change once he arrived at 1600 Pennsylvania Avenue. He hasn’t.

This is compounded by what emerged in the health-care fiasco: his lack of interest in substance. It was clear to some members who met with him that he had little sense of what was in the bill that Paul Ryan crafted.

A few weeks ago, the president exclaimed, “Nobody knew health care could be so complicated!” That wasn’t exactly news to anyone who has thought about the subject in recent decades, and in the days leading up to the collapse he kept asking his staff if the Republican replacement really was good legislation. Maybe he could have taken a little time to discover that it wasn’t. That’s why a consensus built swiftly against it, comprising most conservative and liberal policy experts, hospitals, doctors, many insurers and patients.

He may have a little more knowledge when it comes to the tax system, at least as it affects his own interests. Former senator Bill Bradley, the architect of the 1986 tax-reform legislation, says Trump never forgave him for ending some tax breaks for real-estate transactions to balance revenue lost to lower rates.

On infrastructure, the White House is now suggesting that Trump may work with Democrats. That could be good public policy but don’t hold your breath waiting for it to happen. Cross-aisle coalition-building requires trust; how many Democrats trust Trump?

It was the best of times, it was the meh of times. Apologies to Charles Dickens, but as North Carolina’s... read more