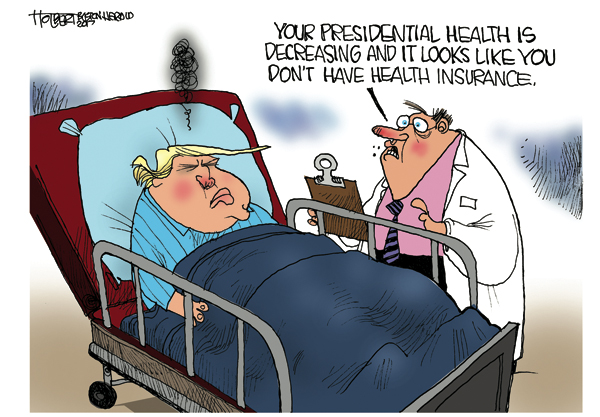 It would be an error to conclude that the Affordable Care Act is working well because House Republicans failed to repeal and replace it.

Although talk of a “death spiral” is overblown — we are not witnessing a situation in which coverage rates will drop precipitously — it is the case that insurers are pulling out of the exchanges. According to the Kaiser Family Foundation, 21 percent of exchange enrollees have access to only one insurer in 2017, compared with 2 percent in 2016 — a huge and very concerning increase. At the same time, premiums on the ACA exchanges have increased significantly — 22 percent in 2017 alone, and more than double during the past four years.

And there were still 29 million Americans without health insurance in 2015.

These statistics matter. Individuals who live in areas with less competition not only have fewer or no health insurance options, but also fewer options for physicians and other health-care services and longer wait times to get appointments and the like. It is the case that (for now) many enrollees on the exchanges are protected from premium increases — but that just means those cost increases are socialized, which when accumulated over time has tangible consequences for middle-class American households.

And of course, for the millions of Americans without health insurance, the ACA has yet to achieve its stated goal of universal coverage.

There are broader problems with the ACA, as well. It essentially maintains the link between your job and your health insurance coverage, which is a problematic feature of the U.S. system. It does not do enough to encourage healthy people to insure against catastrophic and highly unlikely (but very serious) accidents and medical events. It uses excessive government regulation to narrow the options available to consumers in health insurance plans, micromanaging individual choice from Washington and state capitols. It places disruptive burdens on employers. It does not employ market discipline to lower costs, increase productivity and expand choice over the long term. It maintains a structure that confuses prepayment for routine health-care services with insurance against unlikely needs.

Republicans control both houses of Congress and the White House. Given the problems with the ACA, what should they do? The obvious and correct answer is get to work.

It is discouraging that Congress seems to have a different answer. After last week’s failure to pass an ACA repeal-and-replace bill, House Speaker Paul D. Ryan, R-Wisconsin, said that the ACA “is the law of the land” and that it will remain as such “for the foreseeable future.”

Well. Hopefully “foreseeable” is measured in months, not years.

The GOP should dust itself off and begin a renewed effort on ACA repeal-and-replace by stating clearly and unambiguously that its goal is universal health insurance coverage. Former President Barack Obama’s lasting legacy is winning the argument over whether universal coverage is the appropriate social goal. In a very practical sense, that question is settled, and the GOP needs to get on board. Beyond practicality, it is the morally correct goal, as well.

It is the job of conservatives to offer a path to that goal that is compatible with our principles and dispositions. Clearly, market discipline is what is most needed in the U.S. health-care system — again, to lower costs, expand choice and increase productivity over the long term. But more than market discipline is needed. All the broader problems I mentioned above need to be addressed, and more. Fortunately, there are many ideas and plans putforward by conservatives to replace the ACA, and to move health policy in a conservative direction. The GOP’s elected leaders have a lot of material to work with.

There are only a small number of legislative days left on the calendar before the government runs out of money. And many are anxious to move on to tax reform.

These are real constraints. But even still, health policy can’t be left unaddressed “for the foreseeable future.” Politically, the GOP has spent seven years saying it was going to replace the ACA with better policy. Giving up after a few weeks of effort is ridiculous.

There are major problems with the ACA that simply need to be addressed. The strategy of letting the ACA “explode” and blaming the Democrats, as President Trump suggested, is reprehensible. The GOP is the nation’s governing party. It’s time for it to govern.

Strain is a resident scholar at the American Enterprise Institute.

My Turn: Pass the catsup and hold the PC