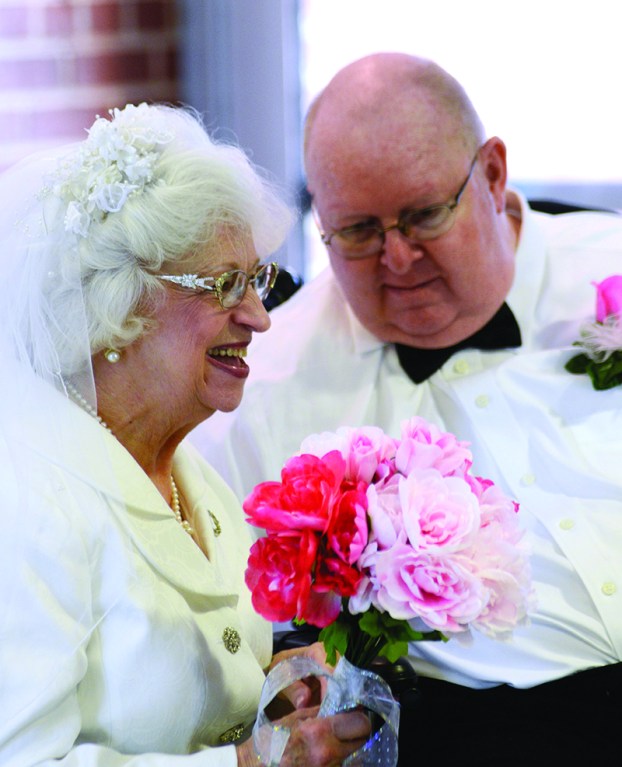 Nancy Bolick, left, smiles after getting a kiss from her husband Bruce at their 50th wedding anniversary where they also renewed their vows in Salisbury on March 21, 2017. Kristi Craven/Salisbury Post

• “We’re going to skip the rings. You already have the rings.”

— Bill Ragsdale, chaplain at the N.C. State Veterans Home, who presided over the renewal of wedding vows for Bruce and Nancy Bolick in celebration of their 50th anniversary

• “I am grateful that his life wasn’t taken. He’s still here for a reason.”

— Valerie Benjamin, whose 17-year-old son, Myron Riley, was shot in the back after what police say was a confrontation with a group of people on Fulton Street

• “I don’t know how in the world the people of Timber Run will survive.”

— Ed Shell, who opposed a site plan for a new State Employees’ Credit Union branch in Granite Quarry because he said it would create traffic problems for people living
in the neighborhood across U.S. 52  from the site

— Craig Pierce, a Rowan County commissioner, addressing a group of teachers who spoke during the board’s Monday meeting to respond to his Facebook post criticizing teachers, the school system and the renewal of a technology contract with Apple Inc.

• “All we have up there on the board is three goose eggs tonight. We have got to find a way to compete and to grind.”

— Danielle Burris, the mother of  19-year-old TaLisha Crowder, addressing Brandon Hawkins in court after he pleaded guilty to second-degree murder in Crowder’s
shooting death in January 2016

• “You want to score a touchdown, but sometimes, on the fourth down, you kick a field goal.”

— U.S. Rep. Joe Barton, R-Texas, after House Republicans pulled a bill that would have repealed Obamacare because they didn’t have enough votes to pass it

Kudos to the Post’s article about Mr. Gilbert Sprinkle. His skills as a coach and mentor are well known in... read more