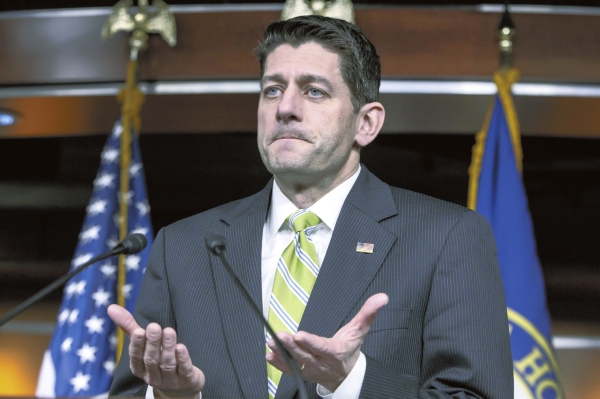 House Speaker Paul Ryan, R-Wis., announces that he is abruptly pulling the troubled Republican health care overhaul bill off the House floor, short of votes and eager to avoid a humiliating defeat for President Donald Trump and GOP leaders, at the Capitol in Washington, Friday, March 24, 2017. (AP Photo/J. Scott Applewhite)

Rowan County’s representatives in Congress had notably different reactions to Friday’s decision by the Republican House leadership to delay a vote on a bill to overhaul health care because it didn’t have enough support to pass.

Rep. Richard Hudson, R-8, is a supporter of the bill, known as the American Health Care Act. In a previous interview with the Salisbury Post, Hudson said the bill represents “the kind of reforms that I’ve dreamed about my entire adult life.”

On Friday, Hudson said he is disappointed about the decision to pull the bill from consideration. Hudson said he made a promise to constituents to fight to repeal and replace Obamacare with health care reform with a limited role for government.

“While I am disappointed we did not reach a consensus yet, I remain unwavering in my resolve to repeal Obamacare and protect North Carolinians from the higher premiums, rising deductibles and lack of choices that will only get worse in the years to come if Obamacare remains law,” Hudson said in an emailed statement.

For now, Obamacare is still the law of the land.

A number of conservatives opposed the bill to repeal and replace former President Barack Obama’s Affordable Care Act. They include new Rep. Ted Budd of Advance.

While he still wants to see a repeal of Obamacare, Budd said he is pleased to see the failure of the GOP health care bill.

“When I asked people in North Carolina for their votes, I promised that I would fight for the full repeal of Obamacare,” Budd said in an emailed statement. “The American Health Care Act did not do that, and I am glad that it was pulled from the House floor today. I agree with President Trump that a better bill will come out of this process. I look forward to that happening sooner than later.”

Days before the bill was withdrawn, Budd announced his opposition to the legislation because he said it left in place the structure of Obamacare. He said Congress should not take a recess until Obamacare is repealed.

Adams, D-12, said the GOP proposal was “a terrible bill.”

“The Affordable Care Act has now passed all levels of scrutiny, and Republicans must accept that it is the law of the land,” Adams said. “It is time for Congress to work together to strengthen the ACA and to make American health care the very best that it can be.”

“There’s a simple reason that Trumpcare was decisively defeated today: It’s a horrible piece of legislation that would hurt working families in North Carolina and across the country,” said N.C. Democratic Party Chairman Wayne Goodwin.

By 2026, there would be 52 million uninsured people if Congress passed the bill, according to a Congressional Budget Office analysis. The same analysis projected an $883 billion reduction in revenue because of tax cuts that would have disproportionately benefited the wealthy. One tax set to be repealed targeted investment income of some high-income individuals, estates and trusts.

““While this bill isn’t going anywhere, it has at least revealed Donald Trump’s true priorities as president. Instead of keeping his campaign promise to fight for the middle class, Trump’s going to spend every day in office working hand-in-hand with congressional Republicans to keep shoveling money towards the wealthiest among us at the expense of everyone else,” Goodwin said.