Chiozza hits 3 at buzzer in OT, leads Florida past Wisconsin 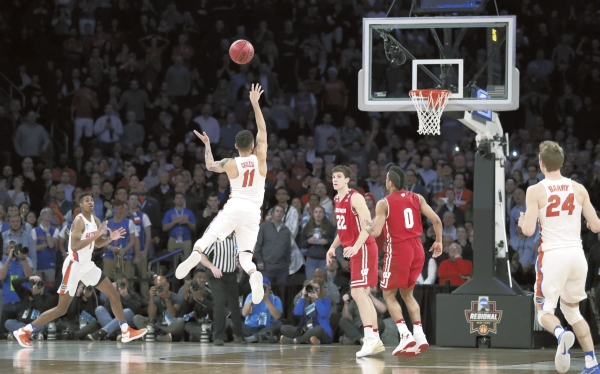 AP College Sports Writer
NEW YORK (AP) — Chris Chiozza went end to end and made a 3-pointer at the buzzer to give Florida an 84-83 victory against Wisconsin on Friday night in the first overtime game of this NCAA Tournament.
Nigel Hayes had given the Badgers (27-10) a 2-point lead with 4 seconds left on two free throws. With no timeouts left, the Gators inbounded to Chiozza and the point guard stopped right at the top of the arc and dropped in the winner for Florida (27-8).
Wisconsin’s Zak Showalter forced overtime with a leaning 3-pointer off one leg with 2.1 seconds left in regulation as the Badgers wiped out a 12-point deficit in the last 4:15.
The fourth-seeded Gators will play South Carolina on Sunday in an all-Southeastern Conference regional final at Madison Square Garden. Florida is in the Elite Eight for the first time since 2014, and for the first time with second-year coach Mike White — the man who replaced Billy Donovan in Gainesville.
Wisconsin built a five-point lead in overtime, but with star guard Bronson Koenig hobbled by a leg issue the Badgers couldn’t close out Florida.
After Wisconsin’s Khalil Iverson hit the front of the rim on a breakaway dunk, Chiozza drove by the Badgers defense at the other end for a layup that tied it at 81 with 24 seconds left.
The Badgers put it in Hayes’ hands on their final possession. The senior who scored the winning bucket in Wisconsin’s upset of defending champion Villanova, used a spin move to draw a foul going to the hoop.
Making their fourth straight Sweet 16 appearance, it looked as if the experienced Badgers had once again found a way to survive and advance.
Chiozza then earned himself a spot in the “One Shining Moment” montage with a shot that will go down in Gators’ history.
KeVaughn Allen carried Florida most of the way, breaking out of a slump with a career-high 35 points.
Hayes had 22 in his last game for Wisconsin.
BIG PICTURE
Wisconsin: The end of an era for the Badgers. Seniors Hayes, Koenig, Showalter and Vitto Brown go out having been part of four straight Sweet 16 appearances. All-Big Ten selection Ethan Happ will return as the focal point for the Badgers next season, but there will be bigger roles for players such as Khalil Iverson, D’Mitrik Trice and Brevin Pritzl.
Florida: The SEC only got four teams into the NCAA Tournament, but it will have three in the final eight (Kentucky plays in the South Regional final against North Carolina on Sunday) and at least one in the Final Four. SEC Commissioner Greg Sankey was at the Garden, enjoying the S-E-C! chants. Sankey brought two ties with him to the arena. He had garnet for South Carolina in game one and then changed to blue and orange for Florida in the nightcap.
UP NEXT
Florida: The Gators split two regular-season games with South Carolina.