Writer Laila Lalami: Sharing other cultures with the world 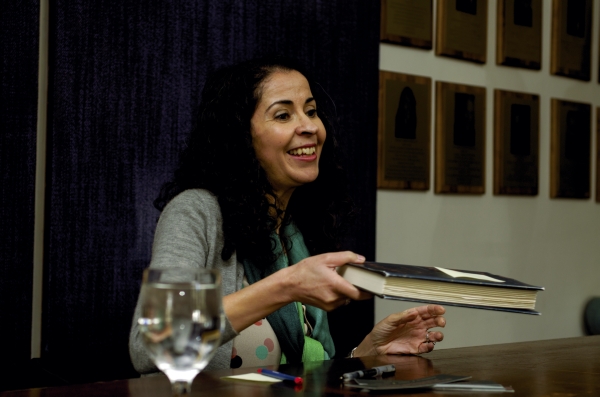 KRISTI CRAVEN/ SALISBURY POST Author Laila Lalami smiles as she hands back a signed book at the 31st Annual Brady Author's Symposium at Catawba College in Salisbury on March 23, 2017.

SALISBURY — Laila Lalami said the right thing to open her lecture Thursday at the Brady Author’s Symposium at Catawba College.

“My greatest pleasure is talking to fellow readers,” she said before describing how she crafted her historical fiction, “The Moor’s Account,” which was nominated for a Pulitzer Prize and Britain’s Man Booker Prize.

Lalami, a native of Morocco who was educated there, in London and in Los Angeles, based her book on the chronicle of the Narvaez Expedition by Cabeza de Vaca, one of four survivors of a failed attempt to find gold in Florida.

One line caught her imagination — the mention of Estabanico, a slave among the survivors. His testimony is not included in the account by the three Spaniards, originally published in 1542.

She had been reading “We Are All Moors: Ending Centuries of Crusades Against Muslims and Other Minorities” by Anouar Majid. The author mentioned Estabanico as the first black explorer of America.

“Wait a minute!” Lalami thought, and that led her to the chronicle. Lalami studied linguistics, which involves history, but she had never heard of Estabanico in her American or Moroccan history studies.

“Narvaez was not a very lucky man.” Lalami said.

He had deaths and desertions within his expedition from the beginning in 1527, as well as a hurricane and no knowledge of the land. He landed somewhere near Tampa Bay. Because he found a tiny nugget of gold on a beach, Narvaez pressed on.

He declared the land for Spain and the pope and sent half his expedition to find the nearest Spanish port, which he guessed was 20 miles away. It was more like 1,000 miles away, because the Spanish did not know how to navigate the Gulf of Mexico.

Narvaez found a green, flat land with a lot of wildlife. His men developed cholera and typhoid.

“Narvaez expedition is the earliest narrative we have of Spanish exploration,” Lalami said.

Cabeza de Vaca never mentioned any women, though the survivors had to live with various tribes to survive.

“The book was published during the Spanish Inquisition,” so writing about women could cause trouble with the church.

He never mentioned the names of the Native American men, although he does name the tribes.

De Vaca couldn’t write about the beatings and torture because the pope had recently declared that indigenous people had souls.

Once Lalami knew Estabnico would be her character, she paled at the amount of research she would have to do and put her idea aside. “But it was too good, I had to go back to it.”

“Ray Bradbury once said, ‘Take a leap and build your wings on the way down.’”

The conquerers read a document that declared all the land theirs and all the people the king’s subjects. “It’s still very fresh. … We create a piece of paper that makes whatever we do OK. … It felt completely contemporary.”

“It was easy to laugh at their hubris,” Lalami said, “but you begin to see parallels to here and now.”

“I had to make historically plausible choices,” she said.

The town Estabanico comes from in Morocco, Azemmour, was once a Portuguese trading port.

“We know he would be speaking Arabic, but there were Berbers in the area, so he might have some Berber in him. We know he had to speak Portuguese for trade negotiations, and that he was a slave to a Spaniard and learned Spanish.”

In 1520, a massive earthquake destroyed the city of Fez, and refugees fled to Azemmour.

“It was also the time of a great drought and people were starving. … The Portuguese were looking for slaves. The famine was so severe people traded themselves as slaves just so they could eat. …

“We know 60,000 women were transported to Portugal as slaves and concubines,” Lalami said.

Estabanico had to be a full character with a life before and after the expedition.

“We must not forget the importance of storytelling to survival. It was central to their survival, like Scheherazade, who had to tell a story every night or she would be killed.”

Lalami is working on a new book, but it’s not a story she’s ready to tell.