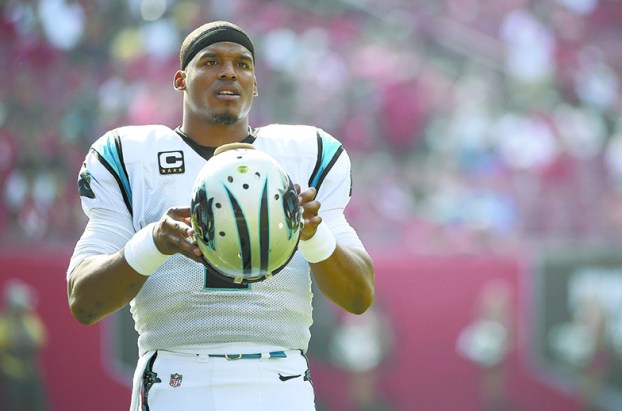 FILE - In this Jan. 1, 2017, file photo, Carolina Panthers quarterback Cam Newton (1) puts on his helmet during the first quarter of an NFL football game against the Tampa Bay Buccaneers Sunday, Jan. 1, 2017, in Tampa, Fla. Newton will undergo surgery at the end of this month to repair a partially torn rotator cuff in his right throwing shoulder. Panthers spokesman Steve Drummond says the 27-year-old Newton will miss minicamp and OTAs, but is expected to be ready for the start of training camp in late July.(AP Photo/Phelan Ebenhack, File)

Surgery for Cam: Due to shoulder, Panthers’ QB will miss OTAs

Newton will undergo surgery on March 30 to repair a partially torn rotator cuff in his right throwing shoulder, according to team spokesman Steve Drummond. Drummond said Tuesday that Newton will miss minicamp and OTAs, but is expected to be ready for the start of training camp in late July.

The 27-year-old Newton injured his shoulder in Week 14 of last season against the San Diego Chargers. He finished the game — and the season— for Carolina without missing a snap. The Panthers hoped rest and rehabilitation would solve the problem, but ultimately it was determined the 2015 NFL Most Valuable Player needed surgery.

The six-year NFL veteran has been rehabbing the shoulder in Atlanta.

A tired-looking Newton said after Carolina’s final regular season game that the team needed a “sabbatical” from football after a run of three straight NFC South championships.

When asked after the season if his shoulder injury played a role in his decreased production, Newton said, “I’m not going to blame anything but my production. Production hasn’t been solid, and that’s me. I can’t point to something and say, ‘Well, this is the reason,’ more so than it just hasn’t been carrying over to the game.”

Panthers coach Ron Rivera said after the season Newton would not need surgery.

He praised the quarterback for giving it all he had and playing through the injury, saying “I thought Cam Newton was about as courageous as it gets.”

Newton threw for 35 touchdowns and ran for 10 more while earning MVP honors two years ago, leading the Panthers to a 15-1 record in the regular season and their second Super Bowl.

But things went downhill beginning with a 24-10 Super Bowl loss to the Denver Broncos. Newton struggled last season, throwing 21 touchdown passes with 17 interceptions and the Panthers never got on track offensively and failed to make the playoffs.

Rivera said in January the Panthers would look into limiting Newton’s running in 2017 in an effort to cut down on the possibility of injuries.

“He’s not as young and nimble as he used to be,” Rivera said. “We have to be smart about that and think about other ways to use him. … You can’t sit there and expect us to run 20 zone reads and then expect him to carry the ball say 10 out of 20 times.”