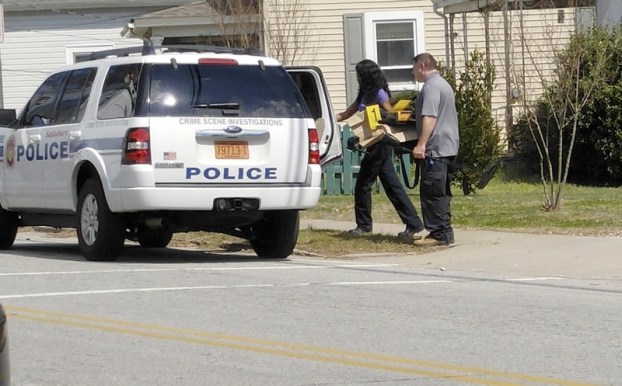 Salisbury Police crime scene investigators place evidence collected at the scene of shooting on Ridge Avenue, not far from South Fulton Street, into a police vehicle. A 17-year-old was shot in the back and ran into a local coffee shop where patrons and the owner helped him before EMS arrived. No arrest has been made. Shavonne Walker/Salisbury Post

SALISBURY — A Salisbury teenager was shot Tuesday on Ridge Avenue and ran into a coffee shop for help.

The Salisbury Police Department said Myron Levonte Riley, 17, was shot once in the back.

Witnesses said Riley, a Salisbury High School student, ran into Mean Mug coffee shop on South Fulton Street. Patrons and the owner applied pressure to his chest, where he said he had been shot. He complained of shortness of breath and being hot, and they applied cold towels to his neck, said patron Anthony Smith.

His injury did not appear to be life-threatening.

Police said there was a confrontation among several people in the 1000 block of South Fulton Street. The shooting happened in the 100 block of Ridge Avenue, not far from Elm Street and around the corner from the business. The initial call came in as a report of someone being chased and shots fired.

Smith said he was at a table by the window and he looked out and saw people scattering. He didn’t hear any shots; neither did the four or five other patrons in the shop.

According to Smith, Riley ran into the coffee shop and said, “Call 911. They shooting.”

Riley was clutching his chest, so Smith asked if he’d been shot. The boy said yes. Smith looked to see if anyone else was outside and locked the door.

All the patrons were calm and helped Riley, said Smith, a local community organizer and pastor. He said they prayed with the teen and tried to reassure him that help was on the way.

Police were called at 12:46 p.m., and Smith said they arrived within minutes. Riley’s mother went to the shop, as did Police Chief Jerry Stokes, Smith said.

Smith followed the ambulance to the hospital to make sure the teen would be OK, he said. He had seen Riley in the neighborhood but didn’t know him well, he said.

Smith said he was grateful to police, who arrived swiftly and immediately began canvassing the area. Officers and detectives spoke to neighbors and were seen collecting evidence and using a metal detector to find bullet casings.

Liliana Spears, who owns Latin Mix convenience store and salon on South Fulton Street as well as rental property in the neighborhood, said the area is not known for crime and should be considered safe.

Students have always walked down the street to nearby Salisbury High School, she said, and the neighborhood is typically one in which not much happens.

Spears urged whoever was involved to come forward or if anyone knows anything to speak up because more lives are at risk when witnesses remain silent.

“Let’s not let this one incident define Salisbury,” she said.

Salisbury High School, Livingstone College and a nearby day care center were on lockdown during the height of the incident.

“We continue to work closely with law enforcement and are extremely grateful for their support and follow their directives,” she said.

Code yellow means all doors are locked and secured, students aren’t allowed to leave the building and there are no outside activities. Classes continue during a code yellow lockdown and parents can enter the school, but the doors remain locked after they enter or leave the building.

“We are heartbroken anytime there is a serious incident involving our students and will do all we can to support our children and their families. We will continue to work closely with law enforcement and are thankful for their strong support and presence in our schools,” Foil said.
Foil said the crisis intervention team is available for as long as needed to assist students and staff.
Anyone with information about this case is asked to call the Salisbury Police Department at 704-638-5333 or Crime Stoppers at 1-866-639-5245. Tips may be submitted online at http://tips.salisburyrowancrimestoppers.org/.
You Might Like

Staff and wire reports Connie Peacock of Salisbury was one of hundreds of extras involved last year in the filming... read more