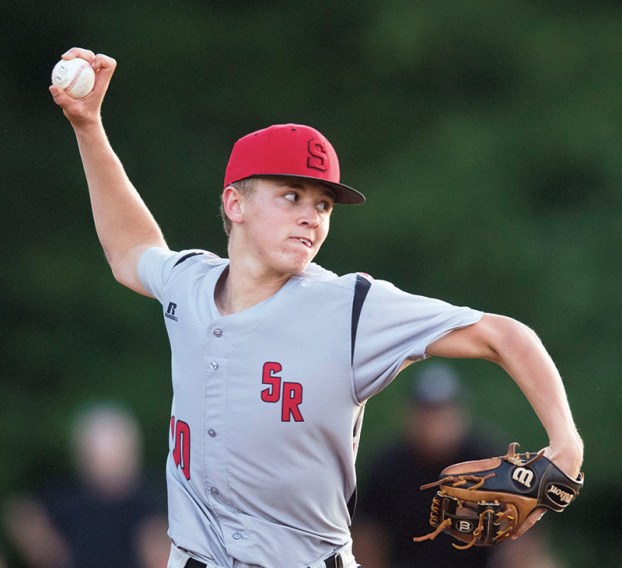 LANDIS — South Rowan ace Walker Joyce knew his mound opponent was going to be Central Cabarrus stud Cameron Kepley, and he was aware that meant he might have to pitch a shutout to win.

But Joyce did even better than a shutout. He threw a no-hitter — an eight-inning no-hitter, no less, as South beat the Vikings, 1-0.

He had his good stuff. He struck out 16, walked one and hit one. Joyce couldn’t remember anyone having to make a tough play behind him. Coach Thad Chrismon couldn’t either.

“Kepley hit a popup on a curveball that I was afraid for a second might fall in,” Joyce said. “But it turned out to be a pretty routine play.”

There was one hard groundball rapped to South shortstop Tyler Shepherd, but that was the only ball stroked solidly. Mostly it was just Joyce, a senior right-hander, and young catcher Jarrid Nelson, a recent jayvee callup, playing catch.

“Give Jarrid a lot of credit,” Joyce said. “He caught me good.”

Kepley was awfully tough. Headed to Appalachian State, he was as good as advertised. Fifteen Raiders struck out before Kepley reached his pitch-count limit (105, by the new rules) in the eighth.

“Kepley was really special,” Chrismon said. “There are a lot of teams in this league with a really good No. 1 pitcher. When you face those guys, it’s hard to come out on top, but Walker was throwing really well. He was mixing it up. He was getting ahead of the hitters consistently, and then he was getting strikeouts. His curveball was really moving.”

Joyce is known for his curveball and struck out 11 in a game earlier this season.

It was 0-0 for so long that Joyce was just focusing on his next pitch. He didn’t think about having a no-hitter until the late innings.

“Really didn’t think about it all until the sixth inning,” Joyce said. “That’s when I realized they hadn’t gotten a hit. No one had said anything about a no-hitter, but they’re not supposed to say anything. And no one was sitting next to me in the dugout. They were sort of avoiding me.”

Through seven innings, Joyce still had a no-hitter, but he didn’t have a win yet. Kepley had matched him pitch for pitch and had allowed just one hit.

After Joyce mowed down the Vikings in the eighth, his pitch count stood at 97.

“He was done,” Chrismon said. “He wasn’t going back out for the ninth.”

When Chrismon informed Joyce his night was over, Joyce was down for a few seconds. But then he was cheering for his teammates to push a run across. It helped that Kepley reached his pitch count with one out in the eighth after a leadoff walk and a strikeout.

A huge pinch-hit double by Austin Hyde put runners at second and third, and the Raiders had the bases full after Dawson Larrimore was hit by a pitch. With Anthony Fox at the plate, a wild pitch made the Raiders — and Joyce — 1-0 winners.

Shepherd got the only other hit for South. Dillon Norton walked twice.

Joyce would’ve pitched Friday at Carson had that game not been postponed, and then it was postponed again last Saturday. Now he’ll probably pitch at Carson this Saturday.

The zeroes piled up on the scoreboard. South had just one hit in the first seven innings.