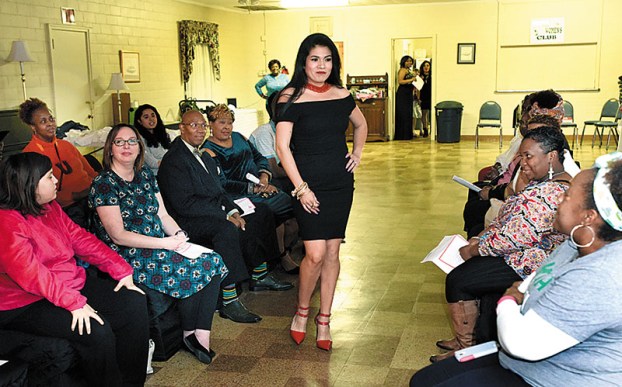 A fashion show with an emphasis on  diversity was held at the Spencer Women’s Club hosted by Women Embracing Excellence. Each of the 14 local models modeled their own outfits in the “Fashion Fades, Styles Are External” themed show.

Little Luren Noell Crummell got the show off with laughter when she shouted with excitement,“It’s time for the models.”

Tiny Taylor Brice was the first model to walk the runway. She was a perfect “walking doll” in two of her outfits. The third outfit didn’t go as well, as she cried about that one.

Alessandra Baca modeled a spring dress with a jacket and a royal blue party dress with great pride and poise. Kierstan Eagle modeled a colorful spring dress by spinning in circles down the runway making the dress stand out with the action.

Seven Hazel Boone modeled a white dress with  a fur jacket.  Her pink gloves, pink hair ribbons and pink shoes topped off the outfit. It was not part of the show, but her name Seven Hazel needs to be explained.  She is the seventh female in the family named Hazel so why not name her Seven Hazel?

Cordoba’s ankle length dress with two thigh high slits on the sides was a crowd pleaser.

Crystal Kelly showed two dresses with matching hats that should draw lots of attention when she wears the dresses to church. One of the dresses was a dark, rich pink and the other was  fuchsia. Both were ankle length with matching shoes and purse.

Candela Torres’ stunning black shorts outfit with long sleeves drew “oohs and aahs ” from the audience  as well as applause. The extra tall high-heeled shoes she wore added to the very feminine effect.

Terrance Jamison, the only adult male, modeled a colorful spring outfit with a hat and his camera over his shoulder for a walk in the park. Later in the show,  he was striking in his gray dress suit. He got  good responses from the ladies in the audience.

Abigail Brown  modeled her floor length black formal gown with a fan in her hand like any well dressed lady would surely have.

The founder of the non-profit group, Women Embracing Excellence, Nicole Sherrill-Jamison had said, “I’m hoping that people leave with a feeling of greatness through fashion.” It appeared that the models had a great time as their confidence  grew stronger and they left very pleased with their show.

Proceeds from the show will support education scholarships for women.

By Josh Bergeron josh.bergeron@salisburypost.com KANNAPOLIS — As the City Council eagerly plans a $37 million baseball stadium in downtown, the... read more