‘All I saw was a sheet of flames’: Bill, Susan Kluttz safe after fleeing downtown Raleigh fire 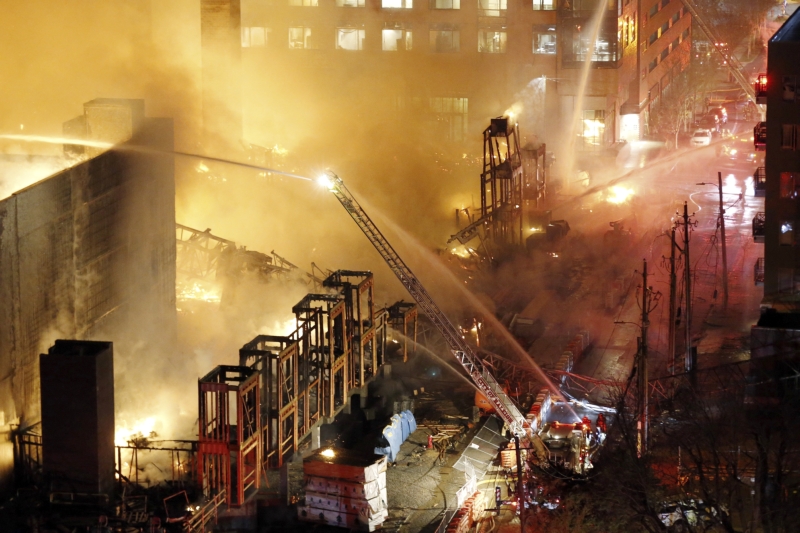 RALEIGH — Susan Kluttz, the former Salisbury mayor who was later N.C. secretary of natural and cultural resources, fell and injured a knee as she and her husband, Bill, rushed away from a five-alarm fire in downtown Raleigh late Thursday night.

The Jones Street fire destroyed the apartment building under construction across from the Quorum Center, where the couple own a residential condominium on the 10th floor.

Their condominium faces north, the side next to the fire, and the intense heat shattered windows, top to bottom. The 17-story Quorum Center is an office and residential tower.

News agencies said the fire damaged 10 buildings overall in the area. While officials initially reported no one was seriously hurt, assessments are still underway.

“It was a nightmare last night,” Susan Kluttz said Friday morning from a hotel room elsewhere in downtown Raleigh, “but we have so much to be thankful for.”

The Kluttzes had gone to bed early, by about 8:30 p.m. Thursday, because they hoped to be awake by 5:30 Friday morning. Susan said she was awakened by the faint sound of a siren, which is not unusual.

“I wasn’t concerned about it,” she said, but Susan thought she must have left a light on in the living room, where there seemed to be a pinkish glow. The couple’s condominium is dominated by windows, and they rely on blackout shades at night.

When she parted the living room’s blackout curtain, Susan looked into a wall of fire higher than their 10th floor, coming from the apartment construction site across the street.

“All I saw was a sheet of flames,” Susan said. “I screamed for Bill.”

The Kluttzes grabbed a couple of things and headed for the stairwell. Kluttz remembers a woman in their hall yelling that their building was on fire. But the 10 flights of stairs to street level were essentially empty, except for the Kluttzes.

Their condominium’s windows had not been shattered yet.

The scene on Jones Street was much more hectic. Many people from their building and others had already evacuated, and emergency personnel soon were telling everyone to move at least two blocks away to Hillsborough Street.

Bill Kluttz hailed a cab, and they traveled to Wake Medical Center, where Susan was in the emergency room until 6 a.m. Friday. Meanwhile, Bill also secured a room in a downtown hotel. That’s where Susan was nursing her injured leg and they were able to get a little sleep Friday morning.

Knowing his former cabinet member lived near the fire, former Gov. Pat McCrory called Susan Kluttz while she was still at the hospital to check on the couple’s welfare. “He was really nice to call me,” Susan said.

McCrory also posted a Twitter message that the Kluttzes lived near the fire.

Both of the couple’s cars are still in the condominium garage, and they could not get to them Friday while firefighters remained on the scene. The Kluttzes figured if they could reach at least one of their vehicles, they could drive back to their home in Salisbury.

As of late Friday morning, they had no access and no idea of the extent of the damage to their condominium, though it probably is significant. During the fire, the smoke was being picked up by weather radar; a construction crane at the apartment site fell toward the Quorum Center.

Given all that happened Thursday night and Friday morning, the Kluttzes are just happy they are alive. “I almost think it’s a miracle,” Susan said.

The Kluttzes have spent most of their time in Raleigh over the past four years while Kluttz was secretary for natural and cultural resources. A former District Court judge, Bill Kluttz retired two years ago.

Susan Kluttz had been asked to speak at Sunday’s funeral service for community activist William Peoples in Salisbury, but now her injury won’t permit it.

“I’m just crushed,” she said. “He was such a special person.”