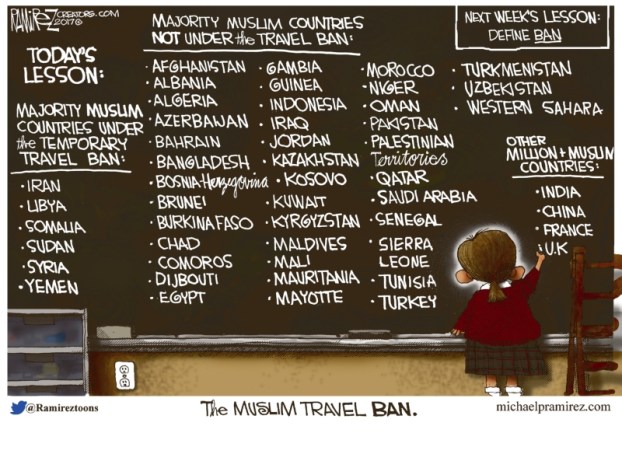 Travel ban is a threat to science

For years, our outdated and overly complex immigration system for scientists and engineers has threatened our nation’s position as a magnet for scientific and engineering talent from all over the world. Now, the government is finally taking action, only it’s in the wrong direction. It has decided to make it more difficult – not easier – for foreign scientists and students to come to the United States and for U.S. scientists to collaborate with colleagues in other countries.

President Donald Trump’s travel ban is creating turmoil in U.S. laboratories. It is discouraging foreign scientists from coming to the United States, and it is creating a climate of insecurity and fear among many of those who are already here. It is threatening collaborative research projects involving U.S. and foreign scientists. And it is disrupting the flow of international students to U.S. universities.

As reported in the journal Nature, foreign-born scientists are reconsidering their plans to work or study in the United States because of Trump’s actions on immigration. Meanwhile, administrators at Harvard University have cautioned foreign students and faculty about potential problems of reentry after traveling outside the United States. Such fears could have serious consequences for research and education in this country. Although the administration limited the scope of its 90-day travel ban to six majority-Muslim nations, the president’s heated rhetoric has raised fears and created a climate of uncertainty about his administration’s longer-term plans and intentions.

We have already seen a precipitous drop in applications to some U.S. engineering schools from international students, who are vital to science, technology, engineering and math graduate programs at universities. According to data from the National Science Foundation, foreign nationals represent more than 70 percent of full-time graduate students in electrical engineering, 63 percent in computer science and about half of all engineering faculty members. But the latest figures from many universities are worrisome. International applications for Dartmouth College’s master’s in engineering management are down 30 percent; at Vanderbilt University, engineering graduate applications from international students have declined 18 percent. The timing and application deadlines suggest that these drops may be due to Trump’s campaign rhetoric rather than the recent travel bans.

The United States has long benefited from the contributions of foreign-born scientists and engineers. Examples abound: Nearly a third of all science Nobel laureates who won their prizes while working in the United States were foreign born. Approximately 40 percent of Fortune 500 firms – including such tech-based giants as Google, Intel, eBay, and Apple – were started by immigrants or children of immigrants. More than five out of six patents in information technology in the United States in 2010 listed a foreign national among the inventors. In view of such contributions, the government should be doing more to attract foreign talent, not driving it away.

Scientific organizations have been speaking out on the travel ban. Rush Holt, chief executive of the American Association for the Advancement of Science, called on the president “to take a balanced approach to immigration that protects national security interests and advances our scientific leadership.” Leaders of the biotechnology industry, heavily dependent on foreign talent, were more forceful. A letter – published in Nature Biotechnology and signed by 166 industry executives – stated bluntly: “If this misguided policy is not reversed, America is at risk of losing its leadership position in one of its most important sectors, one that will shape the world in the twenty-first century.”

It’s not clear that anyone in the White House is listening. In previous administrations, the president’s science adviser and his staff in the Office of Science and Technology Policy would have offered a scientific perspective on issues of this nature. That point of view might not have shaped the final outcome, but its presence would have suggested at least the possibility of informed decision-making. So far, the Trump administration has not named a science adviser or given an indication of how – or whether – the White House science office will be structured and staffed.

The travel ban set to go into effect this month highlights both the need for establishing a channel of high-level scientific advice to the president in the form of an appointed science adviser. It also demonstrates the need for a concerted, unified effort by the scientific community to speak out and oppose such misguided policies. The president needs to turn his attention to this situation soon. It is essential that, as we seek to secure our borders and protect the nation against terrorism and other threats to our security, we do not allow the strength and international reputation of our scientific enterprise to become collateral damage.

My Turn, Ken Houston: Diversity is the issue of our times

Diversity is a term used and taught today in education, government, military and business, to name a few. In its... read more