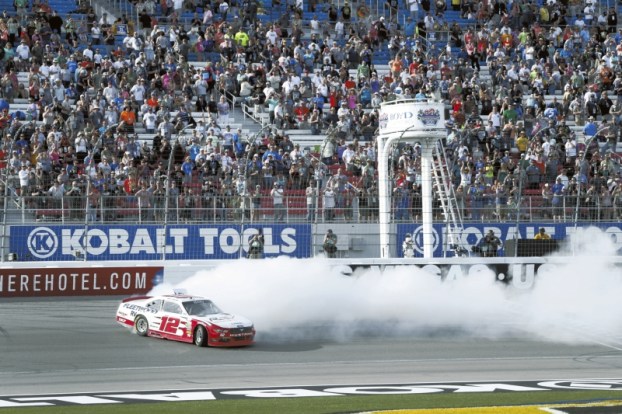 LAS VEGAS (AP) — Joey Logano believes the evolving strategy of restarts has made it one of the most challenging aspects for a NASCAR driver.

Logano got plenty of chances to test his skills Saturday in the Xfinity race, and made all the right moves.

Logano pulled away from Kyle Larson on a restart with four laps left and held on to win his 21st race in the second-tier circuit.

Logano chose the outside lane and moved in front of Larson out of the fourth turn at Las Vegas Motor Speedway for his first Xfinity victory since October at Charlotte.

“There’s so much to think about to understand restarts and making the right decisions,” Logano said. “Not only what lane to pick or getting up through the gears, but the first two laps of a restart are intense and important.”

Daniel Suarez put Cup regulars in the top three spots. Justin Allgaier was fourth, followed by Austin Dillon and Darrell Wallace Jr., who needed medical attention after the race because of illness.

Elliott Sadler finished 10th and retained the series lead by four points over Ryan Reed, who was ninth.

Logano, who started fourth in the Team Penske No. 12 Ford, was in front to start the final stage with 102 laps left and re-took the lead after a cycle of green-flag pit stops with 55 laps left. Logano was first out of the pits after a debris caution and held the lead on the restart with 33 laps remaining.

Logano then held on following three more cautions, the last coming when Matt Tifft ran into Spencer Gallagher and spun out.

Why did he want the inside on the restart?

“Last year in a Cup race I started from the inside as the leader and I lost the lead,” Logano said.

There was an additional wreck at the end, but not early enough to give Larson one more restart chance.

“I thought Joey and I were pretty equal, but I think clean air was big,” Larson said.

Busch started from the pole and just edged Larson to win the first 45-lap segment despite dealing with vibration issues.

Larson beat Busch out of the pits on the ensuing caution, but later gave up the lead to get new tires, as teams still work on the proper strategy for segment racing.

But the move allowed Keselowski, who will start from the pole in Sunday’s Cup race, take the second stage after 90 laps ahead of Busch.

Keselowski had an unscheduled pit stop early in the final segment because of a loose wheel and ended up 10th.

Wallace appeared ill at the driver meeting and went to the infield care center following the race.

By Ralph D. Russo AP College Sports Writer NEW YORK (AP) — In a season that has been anything but... read more